The rise of Kiamrian Abbasov has been remarkable. The welterweight wasn’t on many people’s radar after dropping a decision to Luis Santos on his ONE Championship debut.

But Abbasov was handed a second chance and turned his career around dramatically. He has won three fights in a row for ONE Championship and is the promotion’s reigning welterweight champion.

Abbasov has massively surpassed expectations. But the 26 year old says there is more to come,

“I think people will be surprised. I’m very hungry and I want to face the best. I’m ready to get back to full training after this amazing rest. When I hit the gym this time, I’m going to work without ever stopping.” 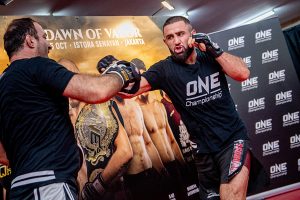 The Coronavirus, or Covid-19, crisis has left Abbasov in limbo along with just about every other professional fighter in the world. But he is eager to return and already had a potential opponent in mind,

“I’m willing to defend the title against anybody, but I think James Nakashima deserves a shot because he’s undefeated and is highly-regarded. He’s a great athlete and I have no doubt we will have a great fight,” he said.

ONE Championship has had more than its fair share of two division champions. Both Aung La Nsang and Martin Nguyen have held title in two divisions while Brandon Vera and Angela Lee have both tried and failed to win a second belt.

Abbasov is extremely ambitious and would like to challenge La Nsang for the middleweight belt, one of two titles the Burmese fighter currently holds,

“I’ve also talked to my team and we believe we can go up in weight and challenge for the ONE middleweight title. That’s a fight I’m very much looking forward to if we can make it happen.” 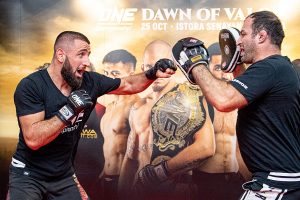 There are no confirmed events on the current ONE Championship calendar. The promotion is waiting for the coronavirus crisis to ease before returning to what had looked set to be a very busy 2020 schedule.

So Abbasov doesn’t know when he will be making the first defence of his welterweight title but the 26 year old says he will be ready,

“Right now though, it’s up to ONE Championship. I’m just ready to go and I can face anybody, it’s all the same. I’m looking forward to setting that date and defeating my next opponent,” he said.

He has won 14 out of his last 15 fights and is still relatively young in MMA terms. Abbasov is at the pinnacle of his profession and there is still plenty of time for him to evolve and improve.

He says that when he steps into the cage it is like flicking a switch. Once the bell sounds Abbasov becomes a ‘beast’,

“I’m a completely different person outside (of the cage) but once that door closes, the beast is let out and I’m ready to go. I want to excite fans and give them their money’s worth, and show the world my brand of fighting,” he said.

La Nsang is one of the biggest names on the ONE Championship roster and has a much higher profile than anyone currently in the welterweight division. In this context it’s easy to understand why Abbasov is talking about moving up to middleweight.

But regardless of who he is matched with next the reigning ONE welterweight champion just wants to continue raising his profile by sharing his particular brand of fighting with the fans,

“I hope I can continue to introduce myself and show people what I bring to the battlefield.”