American wrestler James Nakashima believes he can secure a title shot with a win tomorrow night.

The 30-year-old native of Dwight, Illinois is slated to lock horns with former UFC title contender Yushin Okami at ONE: ‘Dawn Of Heroes’. He is excited to be testing himself against one of the biggest names in Asian MMA,

“ONE Championship is keeping me active and keeping me on great cards like this. I’m grateful and Yushin Okami is a big name so I’m pretty excited,” he said.

In little more than three years as a professional mixed martial artist, Nakashima has established himself as one of the best welterweight prospects in the world. He won his first nine bouts, capturing the Legacy Fighting Alliance 170lbs title in the process. 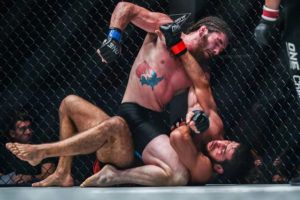 His perfect professional record drew the attention of Asia’s biggest MMA promotion. The next chapter began with an outstanding performance at ONE: ‘Conquest of Champions’, where Nakashima dominated Raimond Magomedaliev for 15 minutes to emerge with a unanimous decision win.

Nakashima then moved on to face one of the most experienced men in the organization. He fought and defeated ex-welterweight title challenger Luis Santos via second-round stoppage at ONE: ‘Roots of Honor’ with the Brazilian forced to tap out after suffering an injury.

The MMA Lab representative knows if he plays his cards right against Okam it could lead him to a shot against reigning welterweight champion Zebaztian Kadestam,

“There is no other goal. I want to be a world champion in this promotion. A win in this fight will definitely make me a strong contender for the title,” he stated. 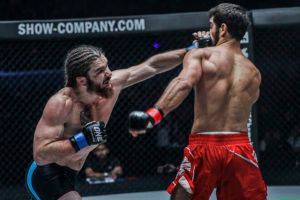 Nakashima knows that he will need to be at his very best against Okami. The Japanese fighter is coming off a disappointing defeat at ONE: ‘For Honor’ but will have a big advantage in terms of size and experience,

“Yushin Okami is a big welterweight. He has also shared the stage with some of the best fighters in the world. I just need to be really fundamental and really smart. I’ve seen some tendencies in his game that I have to be aware of and be ready for,” Nakashima said.

Nakashima sees this as a make or break bout,

“My future in this company lies in this match on Friday. I’m totally focused on Yushin Okami,” he said.

Okami fell short in his ONE Championship debut, as did Yoshihiro Akiyama and Sage Northcutt. But while three UFC veterans have fallen down the rankings new contenders like Cosmo Alexandre have emerged to fill the void.

When it comes to ONE Championship’s welterweight division fans have learned to expect the unexpected and Nakashima is determined to just keep on winning until that title shot arrives,

“I am here to fight anyone in this division. I will face anyone. If this fight doesn’t give me the title shot, I will fight the next guy. My job is to win matches until there is nothing more to prove.”