The buildup to a Kim Jae Woong fight is always fun. Last time out he said he was going to beat former featherweight and lightweight champion Martin Nguyen easily and that’s exactly what the Korean is.

Next up is Tang Kai at ONE: ‘Only the Brave’ and Woong is adamant the Chinese fighter is not on his level,

“I’m not looking down on them but the (fighters) he won against are the ones I could have finished in the first round. I’m better than Tang Kai on all levels.” 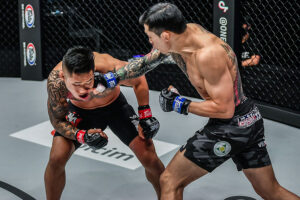 Woong is coming off two very impressive finishes. So is Tang for that matter, in fact the Chinese fighter has won eight in a row but doesn’t seem to hold much weight for his Korean opponent,

“I really want to ask, who has he been up against? I don’t think Tang Kai has fought against any big-named (fighters) until now. The (opponents) he won against are the ones I could have finished in the first round.”

Woong sent notice to the featherweight division with his first round finish of Nguyen. He knocked the former two division champion out and is expecting a striking match next Friday,

“Tang Kai is not good at jiu-jitsu or wrestling from what I observed. I think his only core skill is striking so I’m guessing that’s all he will go for.” 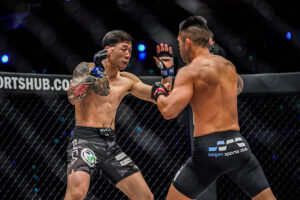 Woong is currently ranked #1 at featherweight and wants a title shot. He says accepting a matchup with the #4 ranked Tang was a calculated risk,

“Tang has had consecutive wins and I received an offer so I felt like I would be running away from an opportunity to prove myself if I were to turn it down.  Since I have a lot of time before the title shot, I just thought it would be a good warmup.”

Woong doesn’t just want to rubber stamp his title shot with a win next week. He wants to damage to his opponent’s reputation so badly that Tang Kai’s name will never get mentioned again,

“After this match, I think Tang Kai will fall to the level where he’s someone not worth mentioning ever again.”

Woong talks the talk. With his recent performances the Korean has also walked the walk and he will be looking to prove that he has what it takes to be the next featherweight champion.