On the preliminary portion of UFC 243 in Melbourne at Marvel Stadium, Kim Ji Yeon worked her superior striking arsenal and broke down Nadia Kassem to get the late second-round finish.

As both fighters met at the center of the octagon, Kassem faked the glove touch and kicked Kim in the midsection flinging her back a few steps.

In response, the South Korean connected with a clean left counter as her opponent rushed in with her hands low and chin high. Kassem dropped to the mat but immediately bounced back up with Kim attached to her back.

Other than a takedown from Kassem, the rest of the first frame was dominated by Kim with counters while Kassem wildly pressed forward predominately utilizing the front kick.

Kassem continued with a lot of movement in the second round yet as the clock ticked on, her attacks started to wane. Instead of waiting to counter, Kim was putting combinations together at a much more fluid pace.

After absorbing a kick to the body, Kim came back with a flurry that knocked Kassem’s mouthpiece out. In a major refereeing error, Jim Perdios stepped in during the exchange and stopped the action to put the mouthpiece back in place despite the protests of Kim and her corner.

But that only delayed the inevitable. Once they got back to throwing leather, Kim upped the volume and hurt Kassem on multiple occasions even making her turn away.

Kim realized her adversary was running on fumes, so she ripped the body with looping hooks with Kassem eventually collapsing with one second left in the round.

After some lackluster performances Kim (9-2-2) takes the scorecards out the equation and notches the second TKO victory of her career. During the post-fight interview, she expressed interest in a quick turnaround at UFC Busan in late December on home turf.

Kassem (5-2), on the other hand, is finished for the second straight time after winning her first five fights and drops to 1-2 in the UFC Octagon.

The biggest news of the night was the rise of City Kickboxing. The New Zealand-based team went three for three and claimed the undisputed middleweight in the main event.

UFC debutant Brad Riddell kicked it off with a fight of the night performance in a decision win over Jamie Mullarkey. Then, in the co-main event, Dan Hooker put on a three-round striking clinic against Al Iaquinta to introduce himself to the lightweight elite.

Israel Adesanya topped it off with a second-round knockout over Robert Whittaker in the headliner to become the king of the division. The Kiwi extends his unbeaten record to eighteen and becomes one of the biggest stars for the promotion. 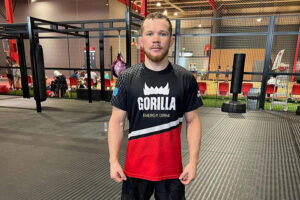 Petr Yan on Aljamain Sterling: ‘his acting is his strong point’!