Ayaka Hamasaki successfully defended her super atomweight title at Rizin 27, scoring a split decision in her rematch with Kanna Asakura. The fight headlined the card at the Nippon Gaishi Hall.

The contest began at a furious pace as both fighters traded heavy blows in the centre of the ring. Asakura was left bloody nosed with Hamasaki landing the more powerful shots and then taking her opponent down in the corner.

Hamasaki delivered some solid ground and pound as well as knees to the head. Asakura responded by finding her feet and hoisting the 38-year-old into the air before dumping her to the canvas. 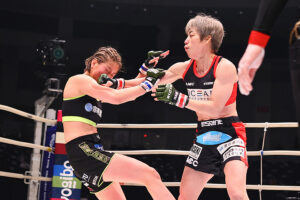 Last time the pair met was back in 2018 with Asakura losing via second round armbar. The action here was far more competitive, and Asakura landed a stinging left hand at the start of the second stanza.

Despite Asakuraâ€™s improved showing, the grappling prowess of the champion was always a factor. HamasakiÂ soon had her opponent down as she looked to lock in a kimura before transitioning to go for the triangle.

Asakura was able to land a cheeky stomp before finding her feet and successfully shooting for the takedown. Working from bottom, Hamasaki once more tried to crank an arm lock but the challenger ended the round in full mount and let go with some solid ground and pound. Both fighters appeared more measured in the final round and threw mostly single shots. Hamasaki stung Asakura with the jab and did some solid work with her counters.

As the clock was running down, Asakura marched forward before again shooting for the takedown. Hamasaki defended well and looked for an arm crank submission as the action went to the ground.

Asakura landed a head kick on the break but it was Hamasaki who secured a takedown in the dying seconds. It might have made the difference as she got the nod by way of split decision to move up to 22-3 while her opponent drops to 18-5. In the co-main event, Roberto De Souza made light work of Rizin debutant, Kazuki Tokudome. The veteran had not competed since 2019 and was given a baptism of fire by â€˜Satoshiâ€™ as the BJJ world champion submitted him in under two minutes.

Tokudome was coming into the fight on the back of two straight victories in ONE Championship. In hindsight, he may well regret his decision to take De Souza down at the start of the fight.

The Brazilian is widely considered to be one of the best grapplers in MMA and he certainly showed it here. Have been brought to the mat by a judo trip from Tokudome, De Souza transitioned beautifully to lock in a triangle choke.

Tokudome was able to resist the De Souza squeeze at first, but the former UFC man eventually succumbed; tapping out for the first time since his 2014 loss to Johnny Case. He now slips to 20-11-1 while De Souza extended his record to 11-1.

After the fight, the victor made his intentions clear and said,

“Letâ€™s be honest, I want that belt. Mr. Musayev, canâ€™t come? I want to fight for the interim belt. Whereâ€™s Takeda?” Koji Takeda (12-1) had earlier put in a tremendous performance to earn a unanimous decision against Takasuke Kume. The Deep champion dropped his opponent with a thunderous right hand in the second round and followed up with an epic showing in the third.

With both men letting their hands go, Takeda began letting out warrior cries as he unleashed a stunning combination that ended with a big right hand to send Kume tumbling.

Despite looking exhausted, he was able to slam Kume to the mat with a mammoth suplex in what was, probably the best round of the night. It was enough to earn him the decision on all three scorecards.

After the fight, he stated his interest in taking on De Souza, saying,

â€œToday I was determined to show everything that I have. Iâ€™m glad I was able to do it. Definitely glad I won. I just want to fight all the tough guys. I want the winner of De Souza and Tokudome, and if thereâ€™s a tournament? I want in.â€