Krush 96 took place at the Korakuen Hall yesterday and Kotaro Shimano successfully defended his super featherweight title for the first time. He was pushed all the way by Tatsuya Oiwa, requiring an extra round to see off the challenger.

The two men traded low kicks in the opening round with Oiwa looking to land looping overhand rights while Shimano fired off three and four punch combinations. At the start of the second stanza the champion scored with a couple of straight knees but this strategy soon became predictable.

Meanwhile Oiwa continued to launch right hands and this resulted in a nasty clash of heads at the end of round two. The challenger threw his entire body weight into a punch and his forehead connected with Shimano’s temple, opening up a nasty cut above the left eye. Shimano’s volume punching seemed to be winning the day at the start of the third. While Oiwa tried to land one big shot the champion was using his jabs and crosses to set up hooks to the body and continuously putting together combinations.

The two men stood in the pocket and traded shots in the third round. Suddenly Shimano wasn’t such an elusive target anymore with Oiwa finally finding a home for the right hand. The judges were unable to separate them, all three scoring the fight a draw meaning an extra round was required.

The break seemed to reinvigorate the champion. Shimano was able to throw shots more frequently in the extra round as Oiwa started to look increasingly ragged and couldn’t provoke the type of wild exchanges that had seen him enjoy success towards the end of regulation time. It was no surprise when all three judges saw the final round in favour of Shimano who improves to 21-12 after defending his title for the first time. Meanwhile Oiwa drops to 15-6 as the challenger was brave but technically outmatched.

The card also featured the semi finals of the super bantamweight Grand Prix. The final will feature Taito Gunji (10-3-1) and Masashi Kumura (10-2) who beat Tatsuya Tsubakihara (6-2-1) and Victor Saravia (6-5) respectively.

Krush is owned and operated by K-1 and employs the same ruleset as the world famous Japanese kickboxing promotion. 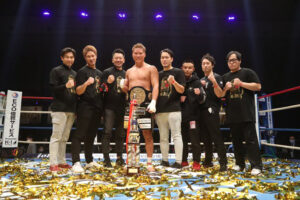