The fans at the Edion Arena, Osaka were not disappointed Saturday night after a thrilling night of action on the K-1 World Grand Prix card.

The last time K-1 held a show at the Edion arena, back in December 2018, the fans were witness to one of the fights of the year when Japanese superstar Takeru defeated countryman Kouzi in an epic battle.

The main event saw Kouzi in action again, this time against Tatsuya Oiwa and the fans got another thrilling toe to toe battle to savour.

Both started fast in the opening round, standing centre ring and opening up with some stinging low kicks. Tatsuya opened up with a double hook combination working the body and head of Kouzi, who looked more composed at first, looking to control the action with a sharp jab. In the second half of the round Tatsuya started to back Kouzi into a corner and unloaded with some heavy punches. Kouzi traded back and at one point caught Tatsuya with a solid overhand right, but struggled to get off the ropes and out of the corner, due to the raw aggression of Tatsuya.

In the second Kouzi started using his jab well to control the range. Tatsuya looked aggressive still, but wasn’t able to push Kouzi back so much. A minute into the round Kouzi fired in a fast high kick, but it looked like it deflected off the gloves of Tatsuya.

Both carried on opening up with some blistering exchanges of punches and Kouzi kept attacking the legs of Tatsuya with fast low kicks. With a minute to go Kouzi landed with a heavy left hook, which got Tatsuya’s attention. Tatsuya kept up his aggressive attacks, but had slowed up from the opening round. 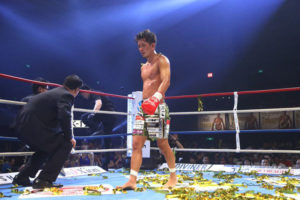 Kouzi landed with another fast high kick at the start of the third round. Both fighters stood in the centre of the ring and traded fast punch combinations. Kouzi showed a little more variety to his game though landing with some fast knees and low kicks.

The final minute of the round saw both fighters dig deep as they traded punch after punch, right up to the bell.  At the end of the fight the judges were unable to separate the two and the fans were treated to a fourth deciding round.

In the fourth round the action carried off where it left off, with both stood in front of each other firing in fast, hard punches. Tatsuya landed with a hard long knee, but Kouzi kept coming back at him with fast punch combinations and looking to finish his exchanges with a low or body kick.

Tatsuya kept pushing forward, but walked onto some sharp counter shots from Kouzi. In the middle of the round Kouzi looked like he was starting to take over a little, as he landed with more punches and caught Tatsuya with a fast high kick.

The final minute saw both go toe to toe again, in unrelenting exchanges of shots. Both stood centre ring with their foreheads touching throughout, in a fight that could have been held in a telephone box instead of a ring, so close was the action.

At the end of the round it looked like it would be a very tough fight to score for the judges. The first judge scored the fight for Kouzi, the second for Tatsuya, but the final judge again scored for Kouzi, giving him the win by split decision.

Tatsuya dropped to the canvas, shaking his head in disbelief and Kouzi immediately dropped down to console his foe, ending a thrilling encounter on a compassionate note. The Japan vs World matches, went very much the way of the host nation with only one World opponent getting the win. In the first match Ryo Aitaka defeated Iranian warrior Karimian Sina, knocking him out with an overhand right in the third round.

Yasuhiro Kido landed with a devastating high kick in the second round to KO Spanish fighter Antonio Gomez. Japan based Brazilian Minoru “Philip” Kimura scored the only win for the ‘world’ team with a TKO in the opening round after three knockdowns, against Sho Oizuma.