Koyomi Matsushima has won three fights out of four for ONE Championship. His sole defeat came in a title match against reigning featherweight king Martin Nguyen.

The 27 year old rebounded from that setback to finish Kim Jae Woong at ONE: ‘Warrior’s Code’ earlier this year. He thinks that third round finish demonstrated the improvements he mas made since the loss to Nguyen,

“I think I’m better than before. I want everyone to expect an even better me next time. Of course, I’ll keep assessing my striking, but I want my mixed martial arts to be even more efficient,” he said.

Matsushima set a high bar for himself by knocking out Marat Gafurov at ONE: ‘Conquest of Heroes’. He became just the second fighter to defeat the former featherweight champion and needed less than three minutes to do it. 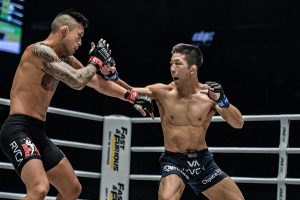 Back to his best

The loss to Nguyen was a setback but Matsushima was back to his best against Woong. He was happy with his performance and the result,

“From the first round I was looking for the takedown and using that as a feint for the right hand. He came out in the third round wanting to make an impression with his attacks, and I think because of that I was able to catch him,” he explains.

Both men had very similar records going into the contest and Matsushima was impressed at how his opponent was able to make adjustments during the fight,

“I had an idea his scramble was strong and I knew his striking is very skillful. In the second round the distance suddenly closed in more than the first round and I thought ‘he’s good’ as he was able to adjust the distance.”

Opponents were served notice about the danger posed by Matsushima’s right hand on the day he knocked Gafurov out. The Japanese fighter has lost that element of surprise and has been working on setting up his trademark strike,

“I was training not to be conscious of landing the right hand strongly. I drilled and sparred (for) timing so that I could use it without thinking during the match and I felt I was able to.”

Kim was riding a four fight winning streak and coming off an impressive ONE Championship debut win heading into that fight. So Matsushima is entitled to feel he is back in the mix at featherweight.

But the Pancrase veteran is not the patient type. He knows the fastest way to earn a second title shot would be to take out one of the top contenders and he has two opponents in mind,

“There are lots of strong guys out there, Garry Tonon is one (and) also Thanh Le. They are so strong but I named them because I cannot avoid them as I aim for the title match again.” 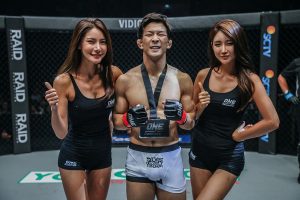 Like every other fighter in the world Matsushima has to put his career temporarily on hold due to the coronavirus, or Covid-19 situation. But he knows the only way to build on his recent win is to continue improving and evolving.

“The most important thing is to integrate my skills into mixed martial arts. I still have a feeling that my wrestling, ground skills and striking are not integrated enough so I need to mix them up.”

Matsushima knows there are other featherweights ahead of him in the queue, like Tonon and Le. But he is a man on a mission and will face whomever he has to in order to work his way up the rankings towards a second title shot.