Koyomi Matsushima has taken ONE Championshipâ€™s talent-filled featherweight division by storm. Knocking out former champion Marat Gafurov on his debut and then following that up with a workmanlike decision win over Won Il Kwon.

At ONE: ‘Dawn Of Heroes’ on Friday night he challenges Martin Nguyen for his featherweight title. Getting a shot at the belt is an achievement in itself but Matsushima is also looking to put one of the worst nights of his career behind him,

The first time that Matsushima strutted his wares in front of a passionate Filipino crowd was in April 2016 when he fought hometown favorite Rolando Dy at PXC 16 in Manila.

At that time, Matsushima carried a bit of hype as he entered the contest as an undefeated competitor with five wins coming by way of knockout. However, it turned out to be a short night for the Japanese featherweight.

Dy, the son of former boxing world champion Rolando Navarrete, finished the job in just 23 seconds by delivering a counter left hook before polishing off Matsushima with a series of hammer fists to compel the referee to wave it off,

“The last time that I was in Manila, I let everyone down with my performance,” Matsushima recalled.

“It has haunted me ever since. I lost badly in that fight. To make matters worse, it is also the first loss on my record.” 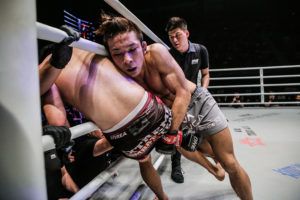 The heartbreaking loss to Dy provided a valuable lesson to Matsushima who went on to ace four of his six outings in Pancrase. That streak included a unanimous decision victory over former PXC bantamweight titleholder, and Dyâ€™s arch-nemesis, Kyle Aguon,

Matsushima was snapped up by ONE Championship and faced former champion Gafurov on his promotional debut. He put in a career defining performance to knock out the former champion and remembers it well,

“I mixed lots of movement, such as feints, and I kept my distance. I was able to get the knockout because everything went as planned,” he said.

In his next fight Matsushima utilized a very different game plan, dominating South Koreaâ€™s Kwon Won Il with his wrestling skills. That earned him a unanimous decision win at ONE: ‘Legendary Quest’.

Having established himself as the top contender in the featherweight division Matsushima returns to the city where he suffered his first loss. Winning the title is his focus, bur he feels there is unfinished business in the Philippines,

“Of course, I am here for the title. But I am also here to erase that memory. Come this fight, I am coming back for redemption. I am going to war and win it,” he said.

He’s only been the distance on three occasions, and two of them were in the bantamweight division,Â  But Matsushima sees this one going the distance and he’s ready to fight for the full 25 minutes,

“Heâ€™s really strong, but thatâ€™s exactly why Iâ€™m happy to have him as my opponent. Iâ€™d like to go to the bitter end, no matter how tired we both get. Iâ€™ve been training with that in mind.”