Kuya Ito has been sparring with Kai Asakura

Kuya Ito faces Yuto Hokamura in the bantamweight grand prix at Rizin 29 on Sunday. The 24-year-old knows that expectations are low heading into his promotional debut but is determined to cause an upset.

He feels fans are writing him off and wants to prove them wrong with a convincing win,

“Everyone thinks I’m going to lose and I hope to prove them all wrong. If I can completely dominate ‘Kintaro’ that would be great for me,” he said.

By contrast Hokamura is a fan favourite. Speaking in an interview with SCMP MMA last month Ito acknowledged this,

“My impression of ‘Kintaro’ is that he has a fan friendly style. He’s got a very appealing style where he’s aggressive, but not only does he strike a lot, he can also grapple. But for me, I’m very excited to see what I can do in my striking exchanges against him.” 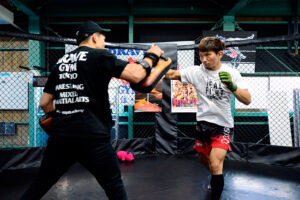 Ito is the newly crowned Grachan bantamweight champion. He beat Hiroki Yamashita, who also fights in the tournament on Sunday, to win that belt. Looking back on the bout Ito says he learned some important lessons.

“Going into the ‘Shian’ fight, I knew that he was a good striker. I knew that I had to utilize my wrestling which is not my bread and butter, but I did. So that’s how I fought him. But I was able to strike with him and I got the better of the exchanges a lot during that fight.”

Ito says that victory has given him more confidence in his stand up skills,

“If I look back, I should have been more confident in my striking against a known striker and I think that’s something that I achieved during that fight, knowing that I can go against a good striker.” 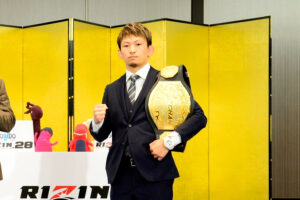 Having lost six out of his first eight pro fights Ito’s career has seen a massive upturn in form in recent years. He has won seven of his last eight and credits a move to his camp, the Brave Gym, with the renaissance and improved recent results.

Ito lives at the gym and feels training with Kazuyuki Miyata has helped him turn his career around,

“I didn’t start my pro career at the Brave gym. I made a transition to come there and ever since that, my style and my record has been improving significantly. So, throughout this Grand Prix I want to sustain myself and myself as a professional fighter and who I am. I want to solidify my identity as a fighter and my style and make a statement,” said the karate specialist. 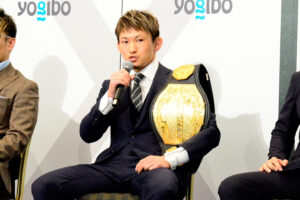 Ito has also travelled to the Triforce Gym to train with Kai Asakura and Mikuru Asakura. The former is the favourite to win the tournament but seems happy to spar with Ito, perhaps because he doesn’t see him as a serious threat.

Ito hopes that testing himself in training against the former Rizin bantamweight champion will leave him battle hardened as he heads into the tournament,

“The Asakura brothers are very tough. But what they do over there in Triforce is more just hard sparring. So it’s nice to test what I’ve been practicing in my own gym and to get hard sparring sessions in with those guys – it’s been very nice for me.”

The training is over and the real business begins on Sunday. Ito has respect for his opponent but is looking forwards to challenging himself against ‘Kintaro’,

“My opponent is aggressive, fun to watch and is very tough. I can’t wait to fight him.”