Mikuru Asakura stands on the precipice of championship glory, but you wouldnâ€™t know it based on his demeanour. Ahead of his Rizin 25 fight with Yutaka Saito, which will crown the promotionâ€™s inaugural featherweight champion, the 28-year-old Japanese star is the picture of nonchalance,

Asakuraâ€™s coolness can be attributed, at least in part, to the fact that he knew the opportunity to fight for gold was coming his way. The featherweight star is unbeaten in the Rizin ring, having toppled the likes of Hatsu Hioki, Luiz Gustavo, Yusuke Yachi and John Teixeira.

He makes it clear that he feels the opportunity to fight for the featherweight title is overdue,

â€œAs I said in the presser, Iâ€™m undefeated in the promotion after seven fights so I totally deserve this.â€ 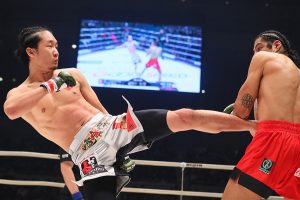 While thereâ€™s no questioning that Asakura has earned a crack at the Rizin featherweight title, itâ€™s not quite as easy to justify his opponent receiving the opportunity to do so. Saito is undeniably talented, and is a two-time champion in Shooto, but has fought just once under the Rizin banner, defeating Kazumasa Majima via second-round knockout in his August debut with the promotion.

International fighters arenâ€™t currently able to compete on the card and Asakura can understand why his opponent has been fast tracked to a title shot,

â€œI think during these circumstances, itâ€™s acceptable (for Saito to receive a title shot). I donâ€™t have very much to say about him. His title is the current Shooto featherweight world champion (and) heâ€™s got a strong heart,â€ Asakura added. 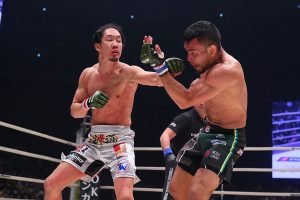 While Asakura respects Saitoâ€™s accolades and toughness, he says he has spotted some holes in his rivalâ€™s game, which he intends to exploit when they step into the ring together later this month.

If things go according to Asakuraâ€™s plan in this matchup, heâ€™ll be crowned the Rizin featherweight champion. He also believes heâ€™ll become one of the organizationâ€™s marquee stars.

â€œ(If I win the title) it means that I will become the face of this promotion,â€ he said.

Itâ€™s hard to argue with that claim from the 28-year-old. He and his brother Kai Asakura, who currently holds the Rizin bantamweight title, are two of the most prominent fighters on the promotionâ€™s roster. Thatâ€™s due in part to their talent, but also to the push the organization has given them both.

Asakura, for his part, is satisfied with the way Rizin has gotten behind him,

â€œI think they do a good job with promoting us,â€ he said. â€œItâ€™s a good thing for me.â€

That being said, the streaking contender wonâ€™t be resting on his laurels. He hopes that, after winning the promotionâ€™s featherweight title on November 21, heâ€™ll be in a position to start taking on international MMA stars and pushing his own stardom to new heights.

â€œI want to challenge fighters who are said to be better and more famous than me,â€ he said.

In order to secure those type of matchups Asakura will first need to get by Saito at Rizin 25. He recognizes that reality, and is focused solely on the task at hand,

â€œI need to finish this upcoming fight first,â€ he said.

Asakura has a 100% record with Rizin and wants to dominate Saturdayâ€™s fight from start to finish,

â€œI will continue to be in the dominant position throughout the fight.â€