Li Jingliang hopes a win over Elizeu Zaleski dos Santos on Saturday will thrust him into the upper echelons of the UFC’s welterweight division.

The bout will serve as co-main event of UFC Fight Night 157, which takes place at the Shenzhen Universiade Sports Centre Arena in China this Saturday.

The Brazilian currently occupies the #14 spot in the rankings and Li wants to get his name on that prestigious list,

“It’s the perfect match-up if I want to climb the ladder. He is in the top 15, so there’s a strong chance that for the very first time, I will be a ranked fighter in my division after I beat him,” he said.

A former Jungle Fight welterweight champion in Brazil, dos Santos has won seven bouts in a row since his unsuccessful promotional debut against Nicolas Dalby in May 2015. To earn a spot in the rankings, the Brazilian standout finished his last three opponents by either submission or knockout. In his most recent outing last May, dos Santos forced Curtis Millender to tap in the first round with a rear-naked choke.

Li is well aware of the threat posed by the hard hitting Brazilian,

“He’s a remarkable fighter and always honing his craft. He also has a good finishing rate that makes him dangerous.”

It is a risk that the Chinese welterweight relishes,

“This is a good fight for me. It will be exciting.” 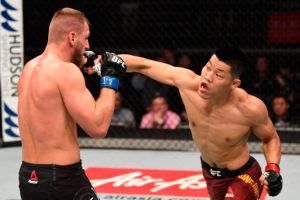 Li hopes a win over dos Santos will help secure him bigger fights against bigger names than the Brazilian in the future,

“I want to be the best, not only in China but also in the world. To be the best welterweight, you have to face the best out there. Of course, I want to test my skills against the big names of my division. Before I reach that level, I have to deal with my opponent this weekend,” he explained.

Li has been on the UFC roster since 2014 and has won six out of his last seven fights. He’s beaten the likes of Frank Camacho, Daichi Abe and David Zawada during this period.

The recent addition of Ben Askren, the emergence of Jorge Masvidal and the return of Nate Diaz has made the welterweight division a crowded place. Li feels he deserves to be mentioned alongside such luminaries and believes he is just a win away from making it happen,

“I am at a great spot in my career, so I need one more big win to improve my standing. I am extremely excited to be facing him in the cage. I cannot wait to test my skills against him. I just hope it goes my way this time. I want to fight the best fighters after this,” he said. At UFC Fight Night 141 he left it late, finishing David Zawada with seconds remaining in the final round in Beijing. That got a huge cheer from the Chinese fans and Li would love to end Saturday’s contest in similar fashion,

“Of course, I want to win my fights that will make the fans cheer. I am always looking for that. If there’s an opening to get the knockout or submission, I will go for that without any hesitation.”

While Li clearly is looking beyond his upcoming opponent he does not underestimate dos Santos. The 31 year old has prepared very seriously but believes he has what it takes to beat a top tier opponent,

“He is good in both striking and ground game but I trained very hard for this fight. I’m hungry to get this win for my country and to extend my winning streak in the UFC.”