Liam Nolan faces Kim Kyung Lock at ONE: ‘Lights Out’ this Friday. The Englishman will be fighting at the Singapore Indoor Stadium for the first time but it is over two years since his promotional debut.

At ONE: ‘Edge of Greatness’ in 2019 he scored a decision win over Brown Pinas. He has won twice since then but it has been a frustrating period for Nolan with Covid-19 restrictions making it tough to travel,

“It was difficult during Covid with no fights lined up, I even had four or five fight fall through last minute. But I kept training and we eventually got there in the end with two good wins. I feels good to be back on the big show again I’ve definitely missed it!” 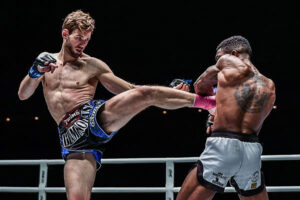 Nolan is coming off a win over Youssef Boughanem who is one of the best foreign fighters to have competed at the Bangkok stadiums in recent years. The Englishman was a big underdog heading into that fight but always believed he could pull off the upset,

“Most people thought I wasn’t gonna win the fight but me and my team really believed that we could make a big upset. My plan was to not give him any respect and come forward and it worked. It felt great to achieve something I’ve visualized for so long.”

The match with Lock was only put together at the last minute and Nolan admits he doesn’t know much about his opponent,

“I don’t know anything about my opponent because there’s been quite a few changes In the lead up to this fight, but it’s okay I’ve trained very hard and I’m ready for anything or anyone they put in front of me.” 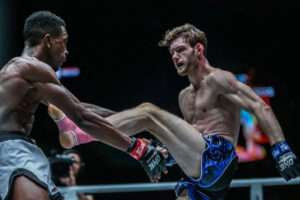 There has been a long break between his ONE Championship fights but if Nolan can make it back to back wins this Friday he knows exactly what he wants to do next,

“Who to fight next? I’m not sure, but my goal at the moment is to win the ONE Muay Thai title in the lightweight division!”

He sees his future in the sport of Muay Thai and isn’t keen to transition to kickboxing just at the moment,

“I would rather stick with Muay Thai for now. I feel I have many advantages under this rule set, but for the future maybe who knows!”

The one fight everyone is talking about right now is the special rules match up between Demetrious Johnson and Rodtang Jitmuangnon at ONE: ‘X’. Nolan will be keeping a close eye on it and thinks the fight will end in one of two ways,

“I’m very excited for this fight, its really interesting to see how this one’s gonna go. I think either Rodtang will knock him out in the first round or DJ wins by submission in the second round.”