On Sunday morning Loma Lookboonmee stepped into the octagon for the third time. She put on a Muay Thai clinic to claim a unanimous decision win over Jinh Yu Frey at UFC Fight Island 4.

After a short feeling out process in the opening round, Frey was first to engage by initiating the clinch and moving the fight along the fence. Loma, however, freed herself and locked up a clinch of her own after throwing a few strikes to close the distance.

From that position, Loma blasted off multiple elbows that seemed to wake up Frey. She scored with elbows and knees in a dominant first round display.

Loma continued the onslaught in the second stanza by closing the distance and clinching up. Frey was able to eventually work her way off the fence but only after eating numerous elbows 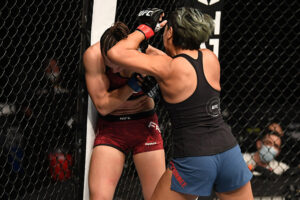 Loma scored with kicks to the body and head as well as peppering in punches to keep her adversary guessing. After some strong words from her coach Frey came out more aggressively in the final round, completing a single leg takedown.

After posturing and breaking the guard, the American scrambled into side control and pressured heavy with the shoulder with lots of time to work for a submission. Yet Loma showed she is no novice on the ground by escaping and getting to her feet as Frey was trying to transition to the back.

Frey abandoned the wrestling which allowed Loma to score with more kicks to the midsection. Mixing in combinations with her hands the Thai looked crisp with her strikes in the fight’s final moments.

Loma took the win with all three judges seeing the fight in her favour. She improves to 5-2 overall and speaking after the fight the Thai said,

“I feel like with Angela Hill…I felt the pressure and maybe I wasn’t ready mentally for that yet, but I came into this fight very mentally strong and I’m happy with the win.”

Frey drops to 9-6 after a second successive UFC loss.

Earlier in the night, Heili Alateng took on Casey Kenney. The match turned out to be a one sided affair with the American claiming a unanimous decision victory.

Kenney punished his Chinese foe with heavy kicks to the body that completely mangled the right side of the body. Alateng kept pressing forward showing his grit only to eat shot after shot over fifteen minutes.

Alateng (14-8) loses for the first time in the UFC after picking up two solid wins against Danaa Batgerel and Ryan Benoit. Meanwhile, Kenney (15-2) gets his second set of consecutive wins with the promotion and moves closer to the rankings.