This Saturday sees a huge milestone for Thai MMA at UFC Singapore.

Loma Lookboonmee will becomes the first ever Thai fighter to compete for the UFC when she faces Aleksandra Albu at the Singapore Indoor Stadium. The strawweight fight is set for the preliminary section of the card.

Like most Thai fighters Loma’s introduction to MMA came via the Muay Thai ring and she started out in the sport at a very young age due to family connections,

“I had my first fight when I was 8 years old. I grew up watching my father, Boonmee Sithemarat, fight, and he has been my idol in the sport right from the beginning. He was a very good fighter and fought at both Lumpinee and Rajadamnern stadiums.” 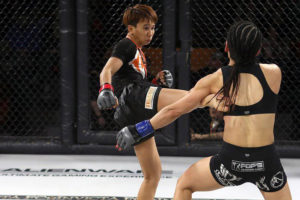 Loma wasn’t exactly pushed into becoming a fighter. She knew from a very early age it was exactly what she wanted to do,

“We have our own gym, Lookboonmee, so it was easy for me to get involved from very young. I won my first fight and was so happy I cried. I had even offered to pay my opponents purse just so I could get to fight and I knew that is what I wanted to do.”

Loma had a very respectable Muay Thai career, establishing herself as one of the most dominant female fighters in the sport and won multiple titles in a career spanning over 200 fights. But it was a chance meeting in Bangkok while that led Loma to take her fight career in a different direction. 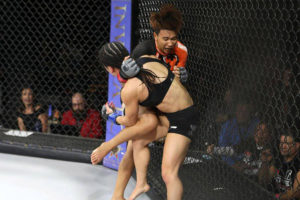 Loma feels she had hit a glass ceiling in her Muay Thai career. But in MMA there would be no such limitations,

“It is different for men in the sport as there are more opportunities in Muay Thai for them to go further and earn more money. In women’s Muay Thai you are more limited, but with MMA there is the opportunity to go much further and get much more exposure.”

Switching over from a strictly stand up base, Loma found the transition difficult at first. She is slowly getting used to it and her team at Tiger Muay Thai in Phuket have helped her win fights in several countries ahead of her UFC debut,

“When I first moved over to MMA, I worked a lot on my wrestling and Brazilian Jiu Jitsu. I didn’t feel at all confident at first on the ground game and my first MMA fight in America on Invicta FC 27, I used my stand up game to get the win.”

Loma’s team have put together a training schedule that focuses firmly on addressing this weakness,

“Now my training program concentrates on all aspects of MMA and I don’t do so much stand up work. I do some Muay Thai and western boxing work but my focus is more on stuff like takedown defence and ground work. I am still not 100% confident in my ground game yet but I am ready to try it out more now.” 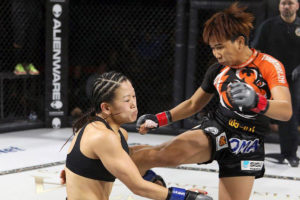 Loma and her team have studied her opponent, to work out a plan and are confident she will be ready on the night. The Thai knows this will be a big chance to make a name for herself and hopefully move onto bigger things.

“She has a fighter’s style and uses a lot of stand up and is very strong. I will try my very best to get the win and will give everything in the fight. I am not looking too far ahead now, if I do well hopefully I will get the chance to fight on UFC again.”

This will be her first fight at strawweight having competed at 105lbs during her MMA career to date. Loma is keeping her feet firmly on the ground but already has her sights set on one goal,

“I know there is a long way to go yet so I’m not thinking about any titles or anything yet, my goal for now is to try to make it into the top ten.”

With the Thai MMA scene still very small, Loma knows this is a huge opportunity to help the sport grow further and had the following message for her Thai fans,

“I feel extremely proud and honoured to be the first Thai fighter to compete on such a big promotion. I hope everyone in Thailand can get behind me and give me support and I promise I will do my very best to get the win.”