Reality TV star Kaz Crossley is training in Thailand. She is best known for appearing in shows like Love Island and Celebrity Ex on the Beach but is also a keen student of Muay Thai.

But Kaz does not head to any of the major tourist destinations when she comes to Thailand. Instead the 28 year old, whose mother is Thai, makes the journey to rural Nakhon Ratchasima to work out at the Wor Watthana Gym:

The social media star has over 1 million Instagram followers. She had helped to raise funds for Wor Watthana to improve the gym and to build accommodation for the children who live there.

Wor Watthana has a whole community of local children living and training at the gym. But housing, feeding and educating them is expensive and Crossley has used her online platform to help secure donations from all around the world:

She was initially a make up artist but became a celebrity after appearing on Love Island in 2014. Since then Kaz has been the subject of relentless scrutiny from the British tabloids and appears to enjoy the quieter life in rural Thailand.

This appears to be the second time this year she has travelled to Thailand to train at Wor Watthana. Kaz is a keen student of Muay Thai who trains regularly in Muay Thai and has extolled the virtues of the sport for both physical and mental health.

Having not grown up in Thailand she has also enjoyed the opportunity to connect to her Thai roots and even took her mother along on a recent trip to Wor Watthana. While British celebrities can often be sighted in tourist areas like Phuket and Pattaya it is rare to see one in Nakhon Ratchasima.

But his reality television star and social media influencer seems very comfortable living the quiet life in rural Thailand and brushing up on her Muay Thai skills in the process. 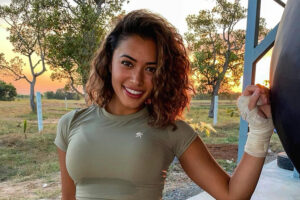