More and more western fighters are coming to Thailand to test their skills at the highest level but Rafi Bohic is the one name that really stands out. The 28 year old from Rennes joined the elite band of foreigners to win a main stadium title, when he beat Pongsiri PKSaenchaimuaythai to win the Lumpinee 147lbs belt.

Since then the French fighter has cemented his status as one of the best on the stadium scene by losing and regaining that belt. He recently signed a contract with ONE Championship and has a big fight booked against Chamuaktong Fightermuaythai at Lumpinee tomorrow night.

Bohic started out in Muay Thai 11 years ago in his hometown of Rennes, but found it difficult to fully focus on the sport due to the lack of local opportunities. Inspired by one of his countrymen’s success on the big stage in Thailand, Bohic decided to make the move to Thailand to see if he could make it at the top level, 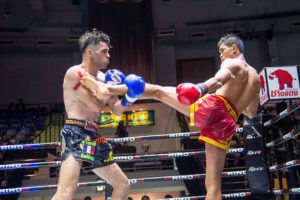 First stop for Bohic was Alamos’ camp in Phuket,

“I came to Phuket to train and fight alongside him at Sing Patong gym in Phuket. I already knew of many of the great Thai fighters from the golden era and top fighters from Europe like Ramon Dekkers, Jean Charles Skarbowsky, Mourad Sari and Farid Villaume and they inspired me to become a better fighter. It didn’t take me long to adapt to Thailand and I’m very happy here now.”

There are several French fighters competing at the highest level in Muay Thai and Bohic puts their success down to determination and willingness to travel,

“French boxers are very strong but it is difficult to progress if they stay in France because the federations and judges and referees make it difficult to really understand the true Muay Thai. They stop the clinch too much and judge shots equal regardless of the power and also you have to wear the pads on your elbows to fight there. French boxers are so good because they are passionate about the sport and came to Thailand to work hard and understand the sport.”

Bohic is now based permanently in Phuket but travels the world to fight. His proudest moment in the sport came in his homeland, however.

“My favourite fight was back in France where I beat the Thai fighter Thanonchai Rachanon, he had a very strong reputation going into the fight and hadn’t lost in two years so I was very proud to be the first fighter to beat him in that time.” 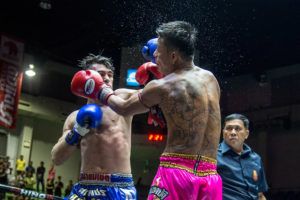 Bohic had no hesitation in naming his toughest opponent so far in his career,

“The toughest boxer I have faced is Chujaroen Darpransarakam, I lost to him by stoppage in France and lost on points to him in Thailand. He is tall and kicks very hard and is dangerous with his elbows.”

When asked about his favourite type of opponent Bohic again didn’t hesitate,

“I like fighters that are aggressive and come forward and bring the fight to me, so I don’t have to go looking for them. I don’t like to fight the tricky, awkward guys that sit back on the ropes and that you have to force to fight.” 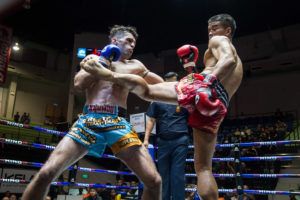 It was recently announced that Rafi has signed a two year deal with ONE Championship and he is excited to compete on the international stage,

“I am very happy to fight for ONE, it is the show every fighter wants to fight on now with great fighters and cards. I will still be able to fight in Lumpinee, but I’m looking forward to being on some big events for ONE.”

Bohic already has one potential opponent in mind,

“I really want to fight Nong-O Gaiyanghadao for his ONE championship belt. My favourite fighter now is Yodsaenklai Fairtex, I love his power in his kicks and punches and I was very surprised though when he lost to Sami Sana recently. I knew Sami is a strong fighter but I didn’t expect that performance, it was very impressive.”

Bohic’s Lumpinee 147lbs belt will not be on the line tomorrow night but he is expecting a tough fight against Chamuaktong,

“He is a very strong and experienced fighter, very good in the clinch and with his knees. I don’t have a set plan for the fight, we will just see what happens and adjust as the fight goes on.” 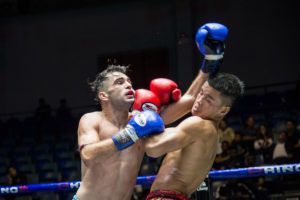 Rafi is 28 now, older than many of the opponents he is facing. But he started his career later than most Thais and still feels he has a lot to achieve in the sport,

“I still feel I can go on fighting for another four or five years yet but it depends on my body though and my mind too, if I still have the desire and hunger to fight.”

Bohic’s name looks destined to be mentioned in the same breath as legends like Dekkers and Skarbowsky. But he’s not too concerned about leaving a legacy, right now his focus is firmly on defending his Lumpinee belt and cementing his status as one of the best Muay Thai fighters in the world,

“I haven’t even started to think about what comes next after fighting, as I think this is a difficult thing for any fighter to think about. Once you start thinking about what you will do after you stop fighting I think this can create problems for the fighter and their approach to fights.”