It is no secret that Martin Nguyen likes to stand and bang. The former featherweight champion thinks he is going to do just that on Friday at ONE: ‘Revolution’.

He faces Kim Jae Woong and Nguyen is expecting the Korean to come forwards right from the bell,

“He’s a tough opponent, he’s a good opponent. He’s the next guy in line, just another guy that I’ll be fighting. He’s just a pressure fighter, he likes to come forward like a zombie. We’re just going to do our thing. I’ll keep the movement going and pick him apart as he comes forward, so we’ll see what happens. Fight night could always be different but I like to go with the flow and see what he throws and see if he can handle what I throw and go from there.”

Woong has been calling for a fight with Nguyen for a long time and the contest has been postponed more than once. The former featherweight and lightweight champion says he is used to getting called out by other fighters,

“I was a champion for three consecutive years. I’ve been called out for the last three years. Even climbing the ranks, I’ve been called out. It’s nothing new to me. He did what he had to do to get that next shot. I think he’s trying to use me as a fast-track to the title but I don’t really care, it’s just another fight for me. He can keep talking, he can keep doing whatever, I don’t really care. I’m just going to do my thing.” 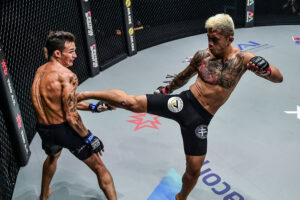 Nguyen is coming off a loss to Thanh Le but feels he was not mentally prepared for that fight,

“I feel like my skills are always there no matter what and I’m only getting better. The main thing I took out of that fight was mentally preparing better inside my head. Now that I’ve put that behind me. I accepted what had happened last October. Early this year there were fights that have dropped out, it gave me a bit more time to recuperate and get back stronger.”

The winner of Friday’s fight will get a shot at the featherweight title. For Nguyen it is an opportunity to recapture the piece of silverware he lost and possibly secure a rematch with Le.