After his win over Koyomi Matsushima at ONE: ‘Dawn of Heroes’ last Friday Martin Nguyen immediately called for a trilogy. This created some confusion among fans, with some speculating that he wanted to move up in weight and challenge newly crowned lightweight king Christian Lee.

Nguyen clarified his remarks in an interview with ONEFC.com today. He was talking about a potential trilogy fight with Marat Gafurov,

“I was talking about Gafurov. I really want to close the chapter there. It’s just one of those fights.”

He didn’t rule out a trilogy match with Lee but the featherweight champion isn’t interested in moving up a division at the moment,

“With Christian Lee I fought him twice, I won twice and I finished one of those. I’ll fight anyone (but) if Christian wants to come down and try to be a champ-champ I’ll be ready.”

Lee’s next fight is likely to be against the winner of the ongoing ONE Lightweight Grand Prix. Meanwhile Gafurov (17-2)  has only won two out of his last three fights so is unlikely to be at the front of the queue.

Garry Tonon (5-0) has won five ONE Championship fights in a row but that’s not even the most impressive streak in the division. Xie Bin (8-1) has won eight straight matches for Asia’s biggest MMA promotion.

Meanwhile Thanh Le (9-2) will be looking for his second straight win for Asia’s biggest MMA promotion when he faces Kotetsu Boku at ONE: ‘Dreams of Gold’ next week. So there is no shortage when it comes to contenders for Nguyen’s featherweight crown. 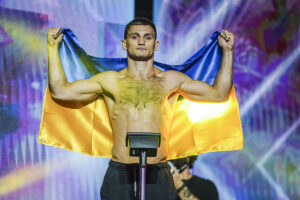