Masayuki Kikuiri scored a second-round knockout against a former welterweight King of Pancrase Hiromitsu Miura to get back in the win column in style on Sunday. The 25-year-old finished the the veteran with a crescent kick at Shinkiba Studio Coast.

Kikuiri began the Pancrase 322 headliner on the front foot and dropped Miuri with a stiff jab early on. Another effective jab landed soon after as the Chiba-native used his low kick to set up the one-two.

Miura responded with his own jab-cross. Kikuiri then caught him with a left hook as the veteran was moving in but the 39 year old still has some tricks up his sleeve. 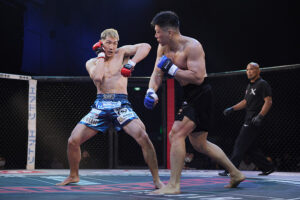 Miura delivered a textbook judo toss, landing in side control but after absorbing a couple of quick punches Kikuiri found his feet all too easily. Kikuiri responded by planting another clean jab and an outside leg kick having gotten the better of the exchanges in the opening stanza.

Miura planted a stout left hook at the start of the second round, following up with a right low kick and an overhand left. But that was as good as it got for the former boxer as Kikuiri soon clipped him with another jab.

Kikuiri landed a stout left low kick to the thigh before folding Miura with the crescent kick. He put the result beyond doubt with four finishing punches before the referee pulled him off at the 2:31 mark.

Miura’s record now slips to 13-8, while Kikuiri, who has spent his entire pro career with the venerable Japanese promotion, improves to 7-2-1 and bounces back from his defeat to Akihiro Murayama at Pancrase 320 in some style. 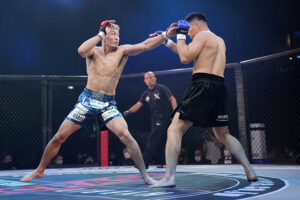 In the co-main event, Takashi Matsuoka (14-10-1) made a big statement at lightweight by knocking out Yusuke Kasuya (10-7-2) in just 22 seconds. The 30-year-old came into the bout having won four of his last five fights including back-to-back victories in his last two.

This was his first win by stoppage since 2018 and it proved worth the wait. Kasuya is a UFC veteran who has been in with the likes of Damien Brown, Frank Camacho and Alex Volkanovski but to say Matsuoka made light work of him would be an understatement.

He ripped a calf kick to the lead leg of the UFC veteran. This prompted Kasuya to march forwards but he marched straight into a monster right hook from Matsuoka that left him totally flatlined.