At 45 years old, Masakazu Imanari is by far the oldest fighter in the Rizin bantamweight grand prix. But it’s not just his age that makes him an intriguing addition to the 16-man tournament.

The wily veteran has racked up a remarkable 27 victories by submission in a career that’s included spells with the UFC, Pancrase, Pride, Deep and ONE Championship among others. His last performance was a loss to Yuta Neza via unanimous decision at Road to ONE 3 and the former Deep champion claims he was surprised to get the invite from Rizin.

He recently told SCMP that,

“I didn’t expect to be invited over to the Grand Prix at all. But when I got the offer, I immediately thought, ‘they must be struggling with participants, they’re really scraping the bottom of the barrel’.” 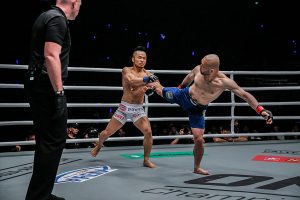 Imanari’s opponent will be Kenta Takizawa. The 26-year-old has a record of 11-7 and has lost his last two fights.

“He’s a young, explosive striker and I think he’s a good fighter, no doubt about that but I’ve faced many opponents like him in the past so I’m not particularly worried about anything. I’ve been practicing a lot of new things and I’ve been working on a lot of new stuff so I’m just excited to show that in my next fight,” said Imanari.

If Imanari says he’s been working on ‘new stuff’ it should be cause for excitement for anyone who’s a fan of the sport.

He has always been an innovator and has inspired numerous other mixed martial artists to attempt moves like the ‘Imanari roll’ and the ‘Imanari choke’. However the veteran suggests that he has something new in the pipeline,

“All I can say is that I’m going to show you something that I’ve never done before,” Imanari teased. 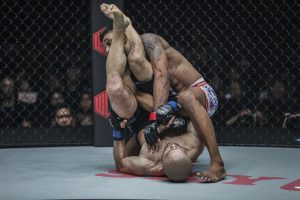 Having competed in grappling tournaments throughout his career, MMA has sometimes taken a back seat for Imanari. In preparation for this fight, he has tightened his focus on the task at hand.

“Normally I used to just grapple and whenever I had an MMA fight confirmed, I’d do a little bit of MMA practice. But I’ve changed that routine lately and recently I’ve been practicing a lot of MMA.”

The match-up with Takizawa appears, on paper, to be a classic grappler vs striker affair. Imanari knows what he’s good at, and when he assesses the rest of the field he says,

“I want to submit them all.”

The veteran may well be the best grappler in the competition but he is not the top mixed martial artist. That accolade probably falls to Kai Asakura and Imanari would love to face the former Rizin bantamweight champion,

“I want to face Kai Asakura, because he’s got the biggest name and I believe he’s the best.”