Michelle Nicolini has not fought since 2019. But in that fight she beat Angela Lee, the female face of ONE Championship, and that is the sort of result fans do not forget in a hurry.

The Brazilian returns at ONE: ‘Empower’ next month and she has been handed a title shot. Nicolini faces strawweight champion Xiong Jing Nan and says she is in a good place ahead of her long awaited return,

“This is my best moment. I’ve been training super hard – not only for this fight, but since my last one. Me and my team have worked together to do what I had to do, so I think I’m in my best shape and my best mindset.” Having scored a major upset by beating Lee she is now up against the only other fighter to defeat the current atomweight champion. Xiong’s strawweight belt will be on the line and Nicolini has respect for the champion,

“She has defended her title so many times, so I have a lot of respect for her,” she said.

However the decorated BJJ black belt believer the Chinese fighter will be unable to handle her on the ground,

“She has had some really good fights, but she has never faced someone like me. I think maybe she has a good ground game, but I don’t think she is going to be able to handle my game. She will try her best and I’ll try my best, but I’m totally confident that my best is better than hers.” 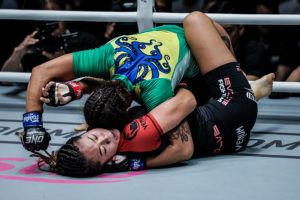 Nicolini is a BJJ black belt so the Brazilian will be very confident of controlling the action on the ground. Xiong probably has the better boxing though and she acknowledges the need to avoid getting sucked into a striking exchange,

“You need to make sure you don’t get drawn in and caught by her striking, and we’ve trained a lot to not get punched,” Nicolini says.

For Nicolini the challenge will be to get the fight to the ground as quickly as possible without spending too much time in striking range,

“Everybody knows I want to take the fight to the ground, so we have some strategies for that and how to not put myself in danger.” 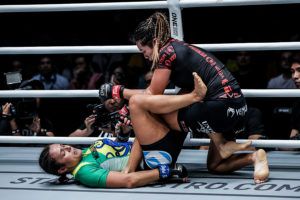 However the equation is the same for both fighters. Nicolini knows that her and Xiong need to close the distance in order to play to their respective strengths,

“For her to knock me out, she has to get close to me to punch me, so she’d better have good wrestling defense because if I get a chance, I’m going to grab her, put her down, and finish her.”

The fight has been postponed for three months. But Nicolini says the timing was important because it has give nher something to focus on during a difficult time,

“I lost my dad and I think wherever he is he will be watching. After my dad passed away, the world title fight brought me back. Instead of staying home and crying because he was not with us anymore, I just focused on the fight and got super motivated after that.” Nicolini sees it as a battle between two strong fighters that could easily go either way. But whatever happens the 29 year old will now be lacking in motivation,

“I know we both are really strong and we are going to see who is better. What she can’t stop is my desire. You know the whole world will be watching. This is the biggest motivation, to show the world what I can do.”