Singtongnoi is a former Lumpinee champion who had beaten the likes of Seksan Or Kwanmuang, Petchmorrakot Petchyindee, Sam-A Gaiyanghadao and Pakorn PKSaenchaigym. The Thai veteran came into the ONE Super Series with a big reputation.

Given his opponent’s experience and reputation Momotaro was understandably apprehensive going into the fight.

“He had beaten Masahide Kudo and looking at his record of about 300 bouts I was excited to see how much I could do. But honestly, with a big name like Singtongnoi as my opponent, I was really anxious before the fight,” he said. 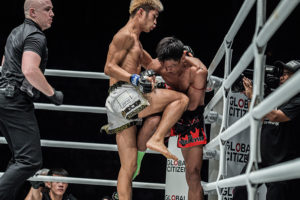 ONE Championship has been signing up some big names from Muay Thai but the flyweight division has clearly emerged as the most exciting. Rodtang Jitmuangnon currently holds the belt and will be defending it for the first time next month.

Momotaro came up short against Lerdsila Champairtour at ONE: ‘Roots of Honor’ and was determined to make more of a mark when he faced Singtongnoi,

“I’d been training constantly, so I just had to get in the ring and do what I’d done in training. I’m relieved to have got the win. I was fully prepared for all three rounds, but winning like that shocked even myself.”

The Japanese fighter says there was a psychological element to his win. Right from the start he realized that there was no need to be intimidated by Singtongnoi,

“I watched his (body) kicks from the start, and I thought from his first attack ‘if that’s the speed, I can deal with it’. From there, I used my footwork and kicks and let go of the spinning back fist that I’d practiced in training.” 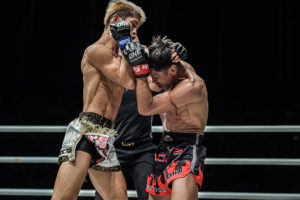 You won’t see many spinning attacks at Lumpinee or Rajadamnern. Momotaro, who is also known as Kohei Kodera, employed an unpredictable strategy with startling results,

“Incredibly, it landed and I saw he was hurt so I followed up with punches, knees and elbows. I imagined that I’d drop him with a punch, and it went just as I had trained. I didn’t think it would be so fast, but the last left cross landed cleanly on his jaw, and that was the end.”

In terms of the title picture Momotaro is clearly behind Lerdsila Champairtour. But he has his sights set on a former champion,

“I want to fight one of the top fighters like Jonathan Haggerty. I don’t know when I’ll fight next, but I’ll quickly accept any offers. I’m just going to stay ready to fight,” he said.

The ONE Super Series has produced some spectacular stoppages. But Momotaro’s will go down as one of the best and he thinks beating a top Thai fighter in such emphatic fashion will make his name ring out around the world,

“I want the world to know how strong ‘Momotaro’ from Japan is.”