Heavyweight champion Kwon Jang-Won will defend his crown against Road FC veteran Myung Hyun-Man. This will serve as the main event of Max FC 18 taking place on April 13 in Hongseong, South Korea.

The 21-year-old Kwon is considered the leader of a new generation of Korean kickboxers in the heavyweight division. In 2016, he earned a title shot by taking out Lim Jun-Soo at the end of the first round via technical knockout.

The following year, he defeated Lee Yong-Sup to take home the Max FC heavyweight title. After winning the strap, Kwon announced that he does not want to face any prospects, preferring to test his skills against an experienced veteran with some form of K-1 credentials.

Luckily for the champ Myung, who retired from mixed martial arts competition with a 5-3-0-1 pro record, decided to resurrect his kickboxing career by signing with Max FC.

He made his promotional debut last November and annihilated Ahn Seok-Hee in the second round, ending his opponent’s seven-fight winning streak. The following month Myung pummeled Jairo Kusunoki in 40 seconds in the co-headliner of AFC 9.

Those two impressive wins earned Myung a title shot and Kwon’s call for a worthy challenger will be answered at Max FC 18 next month. 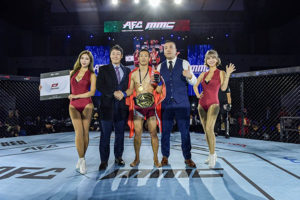