Deep 96 was the second half of a doubleheader which the organization put on at New Pier Hall on Sunday. It was an action-packed evening and the event ended with back to back buzzer-beater finishes.

The headliner was a rematch between Haruo Ochi and Namiki Kawahara with the former’s Deep strawweight title up for grab. The challenger was able to fend off the heavy wrestling attacks by the champion and ended the fight in the closing stages of the second round.

It was no secret what Ochi’s game plan would be. After an initial exchange, he dived for the feet and completed a single leg along the fence. He tried to advance, even trying to take a page out of Khabib Nurmagomedov’s book and trapping the legs. There was not much damage being done so Kawahara was able to eventually get back up and scramble out. 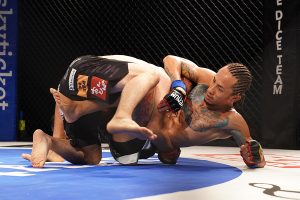 During a short exchange, Ochi was caught with a knee to the midsection and looked hurt. After a couple more takedowns and some wild swinging on the feet, Kawahara finished the round on top after a slick takedown with the round winding down.

The second frame looked to play out exactly like the first round. Ochi completed a double leg and put Kawahara on his back. Kawahara worked to the fence and reversed the position and then he ended up with a bodylock along the fence.

He jumped onto Ochi’s back and wrapped up a body triangle to secure the position. Ochi carried the weight for an extended time and fought the hands off well. Then, Ochi made a huge mistake that cost him the fight. 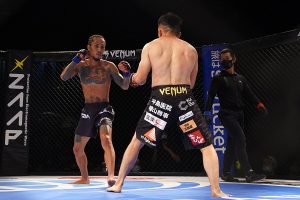 He attempted to slam his opponent off his back but ended up losing the secured arm in the process. Kawahara made the adjustments needed to execute the rear-naked choke and squeezed tight until the referee stopped the contest with seconds left in the round.

Kawahara (7-3-2) gets revenge and earns his first major title. This win makes it consecutive finishes for the Team Alpha Male Japan member after going winless for almost a two year period.

Ochi (19-9-2), on the other hand, is going in the opposite direction. He has not won a fight since his successful title defense against Kawahara back in March 2019 at Deep 88.

The co-main event was a slow burner with Shoji Maruyama and Kosuke Terashima exchanging on the feet for the ten minutes of the fight. Nothing devastating was landed but both fighters stayed active.

Terashima came out of the gate working the calf kick and jab with efficiency. He had his way for most of the first round while Maruyama was having trouble finding his distance.

The tide turned midway through the second stanza with Terashima slowing down and Maruyama connecting with the lead left hook and inside leg kick repeatedly. With so much movement and shots absorbed to the body, Terashima looked completely gassed at the start of the third.

Maruyama pressured and kept his adversary on the back foot in the final round so Terashima resorted to his wrestling and turned the round into a long drawn out scramble. ‘Coro’ fell deeper and deeper into fatigue, lowering his hands and swinging wildly.

As the clock drained down, Maruyama connected flush with a left hook and collapsed Terashima to the canvas. The fight was over with seconds remaining on the clock.

Maruyama strings together his second straight finish and moves his record to 18-12-1 while Terashima is knocked out for only the second time in his career and drops to 16-16-5.