Naoki Inoue happy to be back in Japan for Rizin 22

Naoki Inoue was only 19 when he signed for the UFC. It was the first time the promotion had ever taken a punt on an Asian teenager and things didn’t work out too badly.

Inoue won his first UFC fight but was surprisingly released after losing the second by split decision. Things didn’t work out too badly though and he will be looking for a third straight win in his native Japan when he faces Shooto Watanabe at Rizin 22 on Sunday.

Inoue is coming off a decision win over Trent Girdham at Rizin 21 and was pleased with that performance,

“I am satisfied because I think I was able to show good parts of my game but at the same time there are many things I couldn’t show in that fight so I am actually really looking forward to surprising the fans this weekend.” With fighters from outside of Japan unable to compete on upcoming cards Rizin has made a spate of new signings. Watanabe was one of them and Inoue admits he was surprised to be offered this fight,

“I was surprised because we are both sponsored by the same brand too and I thought ‘are we allowed to fight?’ But sure if he wants to fight me then yes I was totally willing to take it.”

Inoue is based in the US but is back in Japan to prepare for this fight,

“I usually train at Longo and Weidman MMA in New York but while I was in the process of getting my O-1 visa Covid-19 changed everything. Visa application stopped so I had to come back to Japan temporarily to train for this fight,” he said. 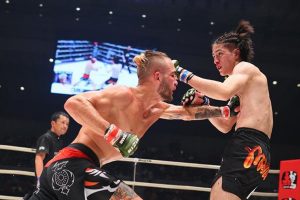 But the 23 year old is happy with his preparation despite having been forced to find a camp in a different country,

“I trained at Sonic Squad and also, in terms of striking and strength and conditioning, I have worked one-on-one with UFC vet Takeya Mizugaki. The training environment has changed but my coach (in New York) actually looks at my training sessions with Mizugaki via Zoom and we exchange opinions so I think I am in a very good training environment now.”

Watanabe comes into this contest as the underdog and Inoue feels there is a good reason for that,

“I think the fight is going to be just as everyone is predicting. In standing or on the ground I will not lose.” Many of Rizin’s best bantamweights are based in Japan. Kai Asakura and Hiromasa Ogikubo will face off on Monday in a fight that has the promotion’s vacant 135lbs belt on the line.

Former champion Kyoji Horiguchi is also fit and healthy again and hoping to return to action before the end of the year. Inoue says he has no idea where he currently ranks but is willing to take on as many contenders as he needs to in order to challenge for the belt,

“I want to keep fighting strong fighters so sure of course, I want to fight for the title. Ideally, I would like to challenge even right now but maybe three or four more wins to get the title shot is what I am thinking.”

Inoue is one of just a handful of Japanese mixed martial artists to have fought for both the UFC and Rizin. He’s competed in several countries but says there is no place like home,

“I like fighting in Japan better. I would like Japanese people to watch more MMA, and there is a big stage called Rizin therefore it is best for me to fight in Japan.”