No such thing as a coincidence: Pacquiao vs Mayweather 2 is probably happening

Last weekend in Las Vegas we saw Manny Pacquiao ease to a decision victory against Adrian Broner. In attendance was old adversary Floyd Mayweather and Ryan Songalia, who was also ringside at the MGM Grand, sees a series of recent meetings between the two men as proof that a money spinning rematch is probably in the works…

For the second time in two weeks, Floyd Mayweather Jr. and Manny Pacquiao found themselves at the same basketball game in Los Angeles.

Another one of those ‘coincidences’ Pacquiao spoke of on fight week.

The only reason this is notable is because a basketball game in Miami back in 2015 served as the first public meet between the two, and was credited with opening the dialogue that led to their long overdue clash.

On Monday night, Pacquiao came up behind Mayweather at his courtside seat at the Lakers vs. Warriors game to greet the man who defeated him in the highest grossing boxing event of all time. Pacquiao went for the handshake but Mayweather offered back a dap instead, pounding his chest four times as he smiled.

If they seemed on a different wave length in how they say ‘hello’, it’s nothing new.

Pacquiao’s last fight, a unanimous decision win over Adrien Broner, was characterized throughout its promotion as an audition for a rematch with Mayweather, who has ostensibly been retired since 2015 but has returned to the ring twice for easy paydays against mixed martial arts fighters in boxing matches.

Asked during the sixth round what he thought about a rematch, Mayweather responded,

“You keep asking me about Manny Pacquiao. He needs to get past Adrien Broner first. And right now I’m living a happy and healthy life.”

Once Pacquiao got through Broner, he responded to a question by calling out Mayweather at ringside,

“Tell him to come back to the ring and we will fight.”

Mayweather offered nothing back when Showtime interviewer asked for his response, staring off dispassionately as if there wasn’t anything he was less interested in than fighting another boxer.

Leonard Ellerbe, CEO of Mayweather Promotions, said “it’s not always about the money” when referring to a fighter whose chosen sobriquet is ‘Money’, and who insists he isn’t at all interested in becoming an active boxer again as he approaches age 42.

Whether Mayweather’s insistence that he’ll never box again is sincere, or is meant to gauge public interest in staging a sequel, only they know.

Still, two things are clear: Mayweather continues to remain relevant by finding himself in the same place as Pacquiao, and Pacquiao has nowhere else to go if not towards a Mayweather rematch.

At age 40, the Philippine boxer/senator is still a capable fighter, as shown by his decisive drubbing of the decade plus younger Broner, and beat him more convincingly than pound-for-pound candidate Mikey Garcia. 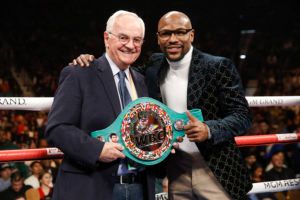 But a fighter at Pacquiao’s stage would be best served to pick his battles.

He holds a WBA ‘regular’ belt, a secondary title belt to the acknowledged championship held by Keith Thurman, which only goes so far in terms of promoting a fight. The appeal of a Broner fight was that Broner has a personality that makes people interested to see him get beat. With Broner at 3-3-1 in his last seven fights, no one was tuning in to see supremacy settled at 147 pounds.

Those fights would have to involve IBF welterweight titleholder Errol Spence, an unbeaten southpaw with one of the best jabs in the sport who looks like he could eventually fight as a middleweight. Or Terence Crawford, the WBO claimant who is handled by Pacquiao’s ex-promoter Top Rank effectively putting that fight in the ‘never gonna happen’ category.

Thurman and WBC titleholder Shawn Porter, like Pacquiao and Spence, both fight under PBC, and are in their early 30s, while Spence is 29.

All of those younger fighters would benefit greatly from having a living legend on their resume’ to give them a leg up in a crowded division lacking clarity, and would represent considerably more risk than Broner, who has effectively become a high profile ‘opponent’ to more dedicated fighters than himself.

Proving he can still beat a guy like Broner at age 40 is one thing, but there’s nothing left to prove against the next generation of fighters.

Mayweather is the fighter he has history with and, if this game of courtside ‘coincidences’ and cryptic non-answers doesn’t lead to a rematch, it’s unclear what Pacquiao is still fighting for.