This week Nobuyuki Sakakibara gave a detailed interview with Gong Magazine in Japan. He spoke about a wide range of issues including the cancellation of Rizin 22 and the departure of Manel Kape.

Kape is coming off a stoppage win over Kai Asakura at Rizin 20 that earned him the bantamweight belt. He had a title defence against Hiromasa Ogikubo penciled in but signed with the UFC instead.

Fans were surprised to discover Rizin did not have the newly crowned bantamweight champion under contract and Sakakibara has mixed feelings about Kape’s departure,

“We’ve built the Rizin name and we don’t want fighters to win and leave us (but) the UFC signing Kape shows how good Rizin’s fighters are,” he said.

The contractual situation sounds complicated to put it mildly with Sakakibara suggesting Kape might return to Rizin and face Ogikubo in the future if things don’t work out for him in the UFC,

“Actually, there is a clause in the contract for champions, but it was not clear that it was exclusive. The clause gives champions one following fight and we did a one time contract for a fight with Hiromasa Ogikubo so that he still has that option to transfer to the UFC and can come back to us if he loses there. I don’t want contracts to be too binding but we do need to tighten up contracts for champions in future.”

However Sakakibara does suggest that he could have handled the situation with Kape better,

“Even with official written contracts there are ways to get out and cancel them especially when professional management is involved. Kape was swept up by all that and considering his feelings I couldn’t ask him to fight for us one more time. As a result, since February I’ve resigned myself to him signing with the UFC, but I maybe I took it all too lightly and was a bit careless.”

He does think the UFC’s decision to sign an Angolan was significant. Sakakibara sees it as evidence of the sport’s globalization,

“I went to America at the beginning of this year and watched the UFC live for the first time in a while. I felt the sense of nationalism and the overwhelming popularity of their homegrown fighters. But in Pride you had Fedor, Crocop, Nogueira, non Americans who became very popular so it doesn’t matter where you’re from if you’re a great fighter. Kape is from Angola, and we’ve helped him to catch their eye.”

He also acknowledges that despite Rizin’s success in Japan the UFC has an allure which fighters cannot resist,

“I told Kape that he could make a lot of money going to the UFC. Any fighter would feel excited to get the chance to fight in the world’s top martial arts promotion with all its high level fighters. So, I really couldn’t say to him not to go.” 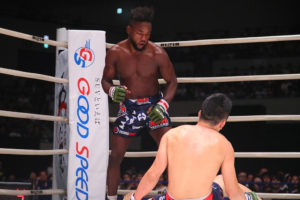 Dana White has received widespread criticism for trying to push through with UFC 249 despite the ongoing coronavirus, or Covid-19 crisis. Eyebrows were also raised when Sakakibara left it relatively late to cancel Rizin 22.

The show was set for Yokohama Arena on April 19th and was only cancelled a few days ago. But Sakikabara says he was working right up until the last minute to try and make the event work,

“The situation with the coronavirus was changing by the day in March, we didn’t know what would happen the following day or week, and we were hoping for a change for the better so we decided to wait until the end of March to make a decision. We hoped that by April the number of infections would have settled, but unfortunately the situation got worse.”

The UFC and ONE Championship have both shelved plans involving behind closed doors events, at least for the time being. But it is not a concept that Sakakibara is particularly keen on,

“We had thought about that or doing a no-audience show, but looking at the baseball and sumo events with nobody there felt dead. Fighters are people, and with no passionate support, they wouldn’t be able to give 100%, so that would have an effect. It would really break my heart to see the fighters under those conditions.”

It sounds like Sakakibara will wait until the Covid-19 situation has improved sufficiently for Rizin to do events with a live audience before booking his next fight card,

“You need that live feeling, the exchange of energy between fighters and fans. It became clear as time passed that it wouldn’t be right do it amid everyone wearing masks, some fighters not able to train to their best condition, and the general feeling of insecurity.”

He also suggested that Rizin’s long term survival could be jeopardized by the coronavirus,

“Sports like those in the Olympics are government funded but MMA is not public funded and we are completely dependent on fans and sponsors. Pro baseball and soccer teams have large parent companies but martial arts businesses have no such background support. If the money stops, they go under quickly.”

However he does have a plan to build his business while most of the world is on lockdown,

“We’re going to focus on taking advantage of social media more to generate revenue from past events.”

That process is already underway and numerous fights have been added to the Rizin YouTube channel in recent days including the exhibition boxing match between Floyd Mayweather and Tenshin Nasukawa and Kai Asakura’s stoppage win against Kyoji Horiguchi.