Noelle Grandjean and Lea Bivins both came into their ONE Championship debut with a lot of hype. But only one of the two atomweights looked like they belonged with the Thai fighter finishing the IMMAF veteran in the opening round.

There was a contrast in their approaches towards the fight with Grandjean taking her time walking out to the cage while listening to a song she had recorded specially. By contrast Bivins ran out, looking like a woman in a hurry.

She made a fast start and looked to overwhelm Grandjean with punches and high kicks but the 26 year old tied her up in the clinch and then tossed her to the ground. The judo black belt looked to work from top position as Bivins, who has spent time training with Victoria Lee, fished for a triangle or armbar. 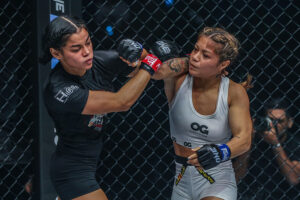 Eventually Bivins got to her feet and threw some kicks to her opponent’s legs before the referee decided to stand them up. Grandjean attempted another toss but this time her opponent was wise to it.

The fast start appeared to have taken a lot out of Bivins who was offering very little by way of offence. Grandjean was able to land slapping low kicks at will, with the American making no effort to check them.

A right hand to the body from Grandjean connected clean and Bivins immediately looked to the referee and asked him to call off the contest. There was till time for the Thai, who is of mixed European descent, to land some follow up strikes before Herb Dean realized what had happened and stepped in. 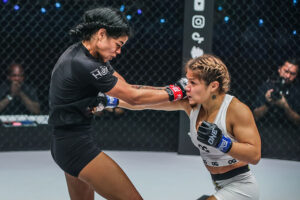 The finish came at the 4:01 mark and there were no complaints from Bivins who clearly had wanted the referee to stop the fight. Grandjean moves up to 4-0 while she drops to 0-1.

Afterwards Grandjean was informed she had been awarded a $50,000 USD bonus for her efforts. Her father, an experienced martial artist who holds black belts in judo and karate, was in her corner and she has been training since the age of 6.

Grandjean is based permanently at Tiger Muay Thai and looks set to be a force to be reckoned with in the atomweight division. It is back to the drawing board for Bivins, one of four fighters on the card to miss weight, who looked well short of the level required. 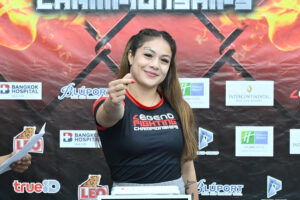