An Olympic Games can mean many things to many athletes but to most itâ€™s the pinnacle of their sporting career. For Japanâ€™s Greco-Roman wrestling ace Shinobu Ota, it feels like it was just the beginning.

After beating champion after champion, and taking his place in the Olympic final, the Japanese champion was humbled by Cubaâ€™s Ismael Borrero and had to settle for silver on the grandest stage in his sport.

That wasnâ€™t the end of Otaâ€™s illustrious wrestling career, far from in fact, as he went on to win the Asian Games in 2018 and the World Championships in 2019, two of the most prized titles in the sport and he remains the reigning -63kg world champion following the cancellation of the 2020 World Championships due to the Covid-19 pandemic. Everyone has a vision of what the Olympics will be like and what they wish to achieve. Some athletes are just happy to be there, itâ€™s an achievement just to qualify and make their country proud. Some believe they have a chance at medaling if everything goes right for them on the day. Others are there just to win gold.

Ota falls into the latter category. He overcome the most difficult line-up of opponents possible before the final ultimately proved to be one contest too far after four epic battles just to grace the gold medal contest.

â€œI didnâ€™t care too much for the Olympics, but I wanted to get a gold medal,â€ said Ota openly.

â€œThe Olympics was actually less than what I expected. It was very normal and ordinary. It didnâ€™t have the special feel that I thought it would have.â€ 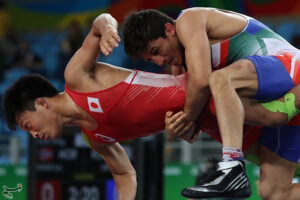 As a member of a national team and one of the strongest nations in wrestling, you have to prove yourself day in, day out, travel all over the country to train, all over the world to compete and there are no guarantees.

Your day-to-day life is dictated to you by your sport, by your national federation. You are in effect a passenger to this sporting machine that holds you as one member of its program designed to churn out medalists at every Olympics.

Now, firmly in charge of his own career, it feels like a weight of expectancy and pressure has been lifted from the broad shoulders of the wrestling prodigy.

Still, Ota has no regrets and nor should he, after a distinguished wrestling career.

â€œIâ€™m proud of what I achieved in wrestling, a silver medal in the Olympics, becoming world number one, but in particular I was very proud of myself winning the World Championships in 2019. I had general interest in MMA but wasnâ€™t thinking I would make the transition.â€ Ota sums up his decision to make the transition from wrestling to MMA very succinctly,

â€œI think being a professional MMA fighter in Rizinâ€™s stage is a better platform for recognition than being an amateur athlete and staying in the dark.â€

He has been training MMA full-time for three months in preparation for his fight with veteran Hideo Tokoro at Rizin 26,

â€œI have been doing some striking for a while, but I wasnâ€™t committed to it back then. I cross train with many gyms and I am learning from many people. Itâ€™s very exciting to learn new things and get that feeling of improving every day.â€ Ota draws inspiration from many things but being such a renowned wrestler he is naturally self-motivated and has an insatiable appetite for training.

He is a long-time fan of mixed martial arts and reveals a surprising figure as his favourite fighter.

â€œMirko Crocop is my favourite fighter,â€ Ota says stoically, his seriousness being almost a token of his immense respect for the Croatian legend who lit up the Saitama Super Arena during the glory days of Pride Fighting Championships.

â€œHe was the best in his prime and he would always put on a great performance. Honestly, he was my idol and I grew up watching him fight.â€

Ota is at his athletic peak but is just in the infancy of his MMA career. Thatâ€™s a scary prospect for the bantamweight division and 66-fight veteran Tokoro, who hasnâ€™t fought in MMA since 2017, will be first to get to grips with the confident MMA newcomer.

Submission specialist Tokoro has all the tools and tricks that only come with a 20-year career in the fight game but Ota didnâ€™t hesitate in accepting such a respected and experienced opponent for his debut. That is because Ota is not an ordinary athlete looking to have a go at MMA. He comes in as one of the most decorated wrestlers to make the transition, still in his prime, and relishing the opportunity to learn new skills.

Ota believes this qualities will be enough to outweigh Tokoro’s immense advantage in terms of experience,

â€œI have the physical advantage and endurance advantage, technique and experience will be all Tokoro but at the end my hand will be raised,â€ he said.

Thereâ€™s a difference between confident and brash and Ota, while looking very dapper during his Rizin media duties, is a young man who is assured of himself and has already conquered the world as a wrestler and is determined that replicated that feat in between the ropes in Rizin.

Being a fan of MMA, Ota appreciates the significance of making his debut at the biggest show of the year and mecca of JMMA, Saitama Super Arena, on New Yearâ€™s Eve .

â€œI think I could not ask for a better place and date to make my MMA debut,â€ Ota says with a smile.

Ota turns 27 at the start of his fight week and admits that he is planning not only a post-fight birthday celebration but that it will also serve as his victory party,

â€œI am planning to do it after my fight, of course along with a victory party and a New Years celebration. I plan to show you all the appeal of my fighting style and to produce an exciting fight!â€