Eight of the world’s top standup fighters will compete in a kickboxing Grand Prix in 2019. The first quarter final has already been booked for the featherweight tournament with Andy Souwer set to face Yodsaenklai Fairtex in Tokyo.

ONE Championship CEO Chatri Sityodtong took to Facebook to announce the full tournament line up:

The fight fighters are all decorated champions and many of them have won tournaments in the past. Yodsaenklai won the original Contender Asia, while Petrosyan was the 2009 and 2010 K1 Max champion, a title Souwer also claimed in 2005 and 2007.

Yodsaenklai also won an eight man Thai Fight tournament in 2013. In the semi finals he beat Samy Sana and the Nigerian will also be competing in the ONE competition alongside Dzhabar Askerov, Jo Nattawut, Petchmorrakot Wor Sangprapai and Charlie Peters.

Given how successful he has been in his kickboxing career Petrosyan will probably come into this competition as the favourite. The three Thai fighters will all be disadvantaged by a ruleset that precludes the use of elbows.

The tournament evokes memories of K-1 Max which brought the best 154lbs kickboxers in the world together every year for a competition that traditionally concluded at the Saitama Super Arena.

ONE Championship’s featherweight division is for 155lbs fighters, although they are required to pass hydration tests to ensure they don’t cut dangerous amounts of weight. 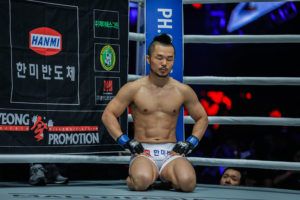