Dae Sung Park wants a fight with Pieter Buist next

Dae Sung Park has been perhaps the biggest success story to emerge from ONE Warrior Series. The 26 year old is emerging as a top contender in the lightweight division.

Park featured at ONE Warrior Series 1. He needed less than two minutes to stop Kimihiro Eto in a bout which demonstrated just how high the calibre of some of the fighters on the Rich Franklin fronted series is.

Three months later he was offered a fight at ONE: ‘Pursuit of Power’ where the Korean scored a decision win over Trestle Tan. This was followed by a frustrating period for Park who was sidelined for a year by a medical issue.

He returned in some style last year, earning two wins in the space of under four weeks to firmly establish his credentials as a lightweight contender. The most recent came at the expense of Honorio Banario and Park was particularly pleased with that performance,

“I would say that the most memorable performance I’ve had so far was against Honorio Banario. He was a former champion and he has had a great career so it was my absolute honor to (face) him.”

Banario is a veteran of 19 ONE Championship fights and a former featherweight champion. It is a name Park is proud to have on his record,

“Honorio Banario is definitely a true champion. By being able to win that match I believe that I earned honor and gained confidence that I too can become a champion one day,” he said. Next in line for a lightweight title shot is undefeated Moldovan Iuri Lapicus. There are some big names in the division like Eddie Alvarez and Shinya Aoki.

But Park has his sights set on an opponent who has also won three fights out of three for ONE Championship,

“I really want to compete against Pieter Buist. I actually had the opportunity to fight him before, but unfortunately the fight didn’t push through,” he revealed.

Both men are coming off a decision win over a Team Lakay fighter in Manila and Park thinks the match has the makings of a title eliminator,

“He did a great job against a former champion like Eduard Folayang, and if I can beat him, I think I would be very close to a title shot. I really want to test my skills against him,” Park said. 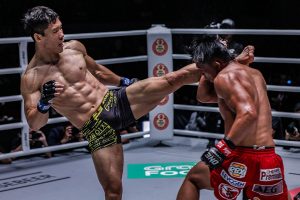 Other ONE Warrior Series alumni to have enjoyed success with the main promotion include Stamp Fairtex and Lito Adiwang. Park only fought once for Franklin but believes the reality show was his springboard to success,

The entire roster is currently on hiatus due to the coronavirus, or Covid-19, situation. So Park has no idea when he will get to fight next.

But the Korean knows exactly what he wants to achieve and has his sights firmly set on the title which is currently around the waist of Christian Lee,

“Right now there is only one goal for me and that is to become a ONE champion.”