Stamp Fairtex says fighting in three different disciplines is a challenge
By: Rob Cox  | February 25, 2020 11:36 am

Stamp Fairtex will take a small diversion from her quest to become the promotion’s first three sport champion when she reverts back to fighting under kickboxing rules in the main event of ONE: ‘King of the Jungle’ on Friday.

Stamp had been concentrating on her MMA career with one eye on the atomweight title that is currently the property of Angela Lee. But first she must face old adversary Janet Todd in a bout at the Singapore Indoor Stadium that will have her kickboxing strap on the line.

The two first fought at ONE: ‘Call to Greatness’ last year in a battle for the inaugural atomweight Muay Thai title. Stamp won a close fight with some determined punch attacks but has a lot of respect for the American,

â€œShe is a very strong fighter and is always in great physical shape. Our last fight was the most hurt I have ever been in a fight and she is the strongest and toughest fighter I have ever faced,â€ Stamp said.

With Stampâ€™s punches having a big impact in their first encounter, it was natural that they would focus on that for the rematch and she now has a specialized boxing coach to help work her hands even more,

â€œI know I need to push a lot as I cannot elbow or take the fight into the clinch, so we have been working a lot on improving my hands for this fight, as well as working a lot of combinations,â€ Stamp said.

Stamp admitted that switching codes can be difficult but does not sound too concerned.

â€œI would find it easier to fight her in Muay Thai, it suits my style more as I have all my weapons available. It can be a little bit difficult to swap between styles, but it’s not too bad and it usually only takes me a couple of days training to adjust back again. I also fought her before too so I know what to expect and will be more prepared for that.â€

Training out of the famed Fairtex camp, Stampâ€™s preparation has been meticulous. She is not quite at her peak but knows exactly what she needs to do on the night,

â€œI am about 80% ready now with just under two weeks to go, so will be 100% ready on the night. I know I have to work on being a lot busier under kickboxing rules and make sure I land with a lot of clean, hard shots. I am confident I will get the win, I am determined that I will keep my title.â€ 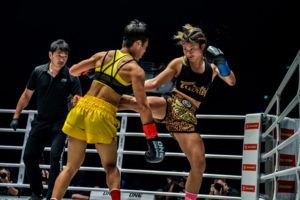 Stamp admits that transitioning to MMA title wasn’t her idea and says this sport produces some unique challenges,

â€œFairtex originally decided they wanted me to try MMA a few years ago, I was happy to try and now I really enjoy it. It is much harder to train than for Muay Thai and kickboxing as there are so many other things to take on board, when you are working the ground game it can be hard to even find time to breathe when your opponent is really pushing you and you canâ€™t afford to make any mistakes as a lapse in concentration could see you get choked out.â€

Angela Lee stands in the way of Stampâ€™s quest to become a three sport ONE champion and the young Thai warrior admits she still has a little way to go yet before challenging for that belt,

â€œMy dream is to win the belt, but I need to be ready first. I need more fights against strong opposition and when the time is right and I feel ready, then go for the title. I know I can beat Angela now if the fight stays standing up, but if the fight goes to the floor she is very strong and it will be very difficult for me there at this stage.â€