Paige VanZant was devastated to discover her bare knuckle boxing match had been cancelled at the last minute. The sexy former UFC star had been scheduled to take on Charisa Sigala at BKFC 20 in London.

She took to Instagram to make it clear that it was her opponent, not her, who had withdrawn from the fight:

VanZant was a star with the UFC. She was snapped up by the promotion after just five fights and initially got off to a very good start, beating her first three opponents inside the octagon.

But VanZant decided to explore free agency after being unable to secure a sufficiently lucrative offer from the UFC. Having lost four out of her final six fights the promotion obviously decided she wasn’t worth breaking the bank for.

VanZant was not short of offers. With 3.2 million Instagram followers she remains an attractive proposition for any promoter and was soon snapped up by BKFC.

A few eyebrows were raised when she decided to sign up for bare knuckle boxing. The 28 year old is just as well known for her face as her fighting skills but decided that this was the right career move.

She competed in bare knuckle boxing twice last year but was beaten by decision on both occasions. She has also embarked on a career in professional wrestling, competing with the AEW promotion.

London’s loss will be Denver’s gain. The fight between VanZant and Sigala has been postponed until October 15th and will now take place at BKFC 31.

In the meantime VanZant continues to post racy content for her army of Instagram fans. Her most recent photo shoot had a tennis theme, and you can even buy clothing with the UFC veteran’s buttocks featuring prominently on the front. 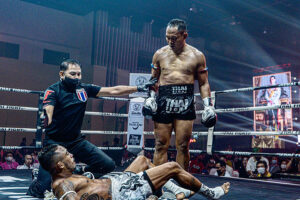