Rizin 30 will be remembered for the quarter finals of the bantamweight Grand Prix. But a small piece of history was made when the promotion put on a women’s kickboxing bout for the first time.

The winner Rina Okamoto, better known as Panchan, who beat Momoka Mandokoro by decision in the opening fight at the Saitama Super Arena. While it was the first ever women’s kickboxing fight it probably won’t be the last.

People are already talking about the prospect of Rina facing Rena Kubota next. The latter has competed several times in MMA for Rizin but comes from a kickboxing background.

A kickboxing contest between Rena and Rina seems to be the right to make. Could we see it on the Rizin 31 card? 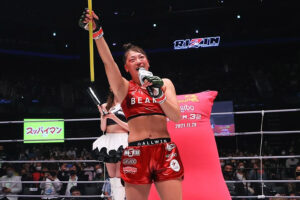