Four fighters secured their spots in the semi finals of the Rizin bantamweight Grand Prix including former champion Kai Asakura. He beat Alan Yamaniha by decision in the headline fight at the Saitama Super Arena.

Asakura started the fight on the front foot, walking Yamaniha down and trapping him against the ropes. The Brazilian shot for a double leg and transformed to a single but he can’t get it down.

Asakura continued to fire away with combinations of punches and knees. Yamaniha tried to circle out but kept getting caught in the corners although he did land a counter right. 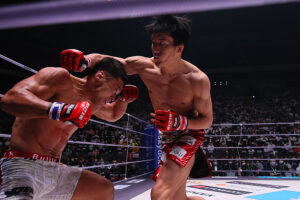 Eventually the sheer volume of shots started to tell and Yamaniha was dropped but he is comfortable on his back and used the time to recover. Asakura eventually stood up and beckoned the Brazilian to get to his feet and the round ended.

Yamaniha was looking to move forwards at the start of the second round but kept eating counters. The action was paused briefly due to a low blow by the Brazilian.

Yamaniha eventually succeeded in getting the fight down and landed a few punches before Asakura popped back up. The Brazilian was starting to hold his own in the striking exchanges and with a minute left in the round he secured the Japanese fighter’s back from a standing position and they remained in that position until the bell. 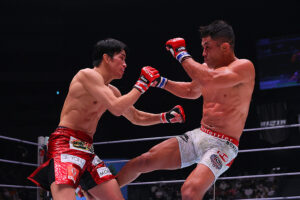 Yamaniha looked the happier at the two men during the break and started to taunt Asakura in the final round. The Brazilian looked much more confident than his opponent, even if he wasn’t landing anything of note.

Midway through the round he shot for a single leg and picked Asakura up and slammed him int othe canvass. The former champion popped back up almost imemdiately but the Brazilian had his back.

With two minutes remaining they separated. Asakur started to press forwards again but Yamaniha was giving as good as he got When the bell rang the Japanese fighter looked dejected while the Brazilian was celebrating. Yamaniha looked delighted with his performance while Asakura was visibly unhappy. However it wasn’t a completely clear win for the Brazilian, even if he had succeeded in frustrating his opponent and grown in confidence as the fight progressed.

In the end all three Japanese judges saw it for the Japanese fighter who books his spot in the semi finals. Asakura improves to 18-3 while Yamaniha drops to 18-9-4 but will surely be back in the Rizin ring before too long after arguably getting the better of one of the promotion’s biggest stars. Naoki Inoue (17-2) booked his semi final spot with a decision win over Yuto Hokamura (14-10). He will be joined by Hiromasa Ougikubo (23-5) who outpointed fellow veteran Takafumi Otsuka (29-19).

The only quarter finalist to finish their fight was Kenta Takizawa (13-7) who finished Yuki Motoya (28-10) with a barrage of punches midway through the opening round, nearly knocking the former Deep bantamweight champion out of the ring.