She was the first ever female kickboxer to win a fight on a Rizin card. Earlier this year she went under the knife after tearing her anterior cruciate ligament but the 28 year old appears to be back on her feet again

Back on the grind

Under the post she has put a caption which translates as:

I’ll do my best to get back on the grind in half a year.

She underwent the operation in April and warned it would be six months before she could even resume training again. Panchan is expecting to be out of competitive action for a year.

She has posted some videos on Instagram which show her punching a bag while sitting down. It sounds like Panchan’s recovery is slightly behind schedule if she is not going to be able to resume training for another six months.

Rizin 30 took place last September and marked the first time the promotion has ever put on a women’s kickboxing fight. She beat Momoka Mandokoro by decision and there was a lot of speculation that Panchan would be handed a matchup with Rena Kubota.

In March she beat Miki Kitamura to win the vacant Knock Out <48kgs title. She has previously held the Rebels <46kgs belt and is one of the most recognizable female kickboxers in Japan with a big following on Instagram.

Several MMA fighters have managed to mount a successful comeback after tearing their ACL. Among them former UFC champions Conor McGregor and Georges St Pierre.

Panchan Rina need only look to Kyoji Horiguchi for inspiration. He tore his ACL, spent a year on the sidelines and then came back to beat Kai Asakura and claim the bantamweight title in a rematch at Rizin 26. 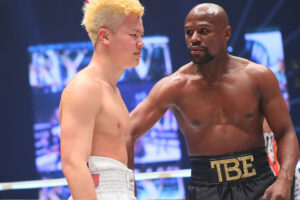