Road FC 57 commenced at the Grand Hilton Seoul on Saturday night with an all women’s main card and Park Jung Eun concluded the show with a devastating knock out of Yuri Shim after a lackluster build-up.

Leading up to the main event every fight went to the judges without much excitement so the crowd in attendance was understandably restless for some action. When the headliner kicked off and Park stepped to the center against Shim, everyone expected fireworks from the onset.

However, that was not the case at all. The opening round was plagued with a myriad of missed shots. Shim continually stayed on the outside, picked her shots from distance with mostly light kicks and moved laterally to avoid any pressure. 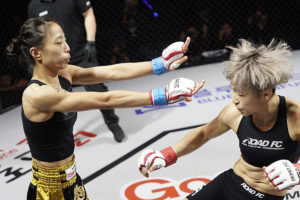 Simultaneously, Park stood in the middle of the cage and feinted most of the round without much connecting on her end. Then the second round came around and Park made the switch. Around 20 seconds in, the former title challenger caught a kick and forced Shim to the fence.

With the clinch tightly secure, Park powered her opponent to the canvas and landed in side control. It did not take long for her to slide the knee over and comfortably sit in mount where she smashed down roughly ten unanswered shots to the dome.

Shim (5-3) sees her three fight winning streak snapped. Park (7-6-1) started 2019 on a losing note but has reeled off three straight since then and ends the year sitting as the number one contender in the atomweight division once again.

Time will only tell if she will ever get another crack at reigning champion Ham Seo Hee, who will be competing for the the super atomweight title at Rizin 20 on New Year’s Eve in Japan. 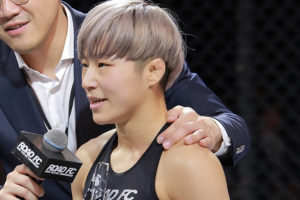 In addition to the atomweight headliner, there were a number of catchweight matchups throughout the night.

Shi Ming (7-3) and Hong Yoon Ha (4-5) picked up dominant decisions over Lee Soo Yeon (1-1) and Emi Tomimatsu (15-16), respectively. Even though Shi and Hong compete around the 50kg limit, they looked to be on a collision course in the atomweight division since it is in need of another contender.

Yukari Nabe (8-3-1) also looked impressive by completely derailing the hype train of Rowan Pilger (3-1) with heavy top pressure and solid ground control. The Japanese veteran cruised to a clear unanimous decision on the judges’ scorecards and extends her consecutive mark to five.