Patrick Schmid wants to get close and personal with Rade Opacic

Patrick Schmid celebrated his 35th birthday earlier this year and has been a professional fighter for over a decade. The Swiss heavyweight has had to wait a long time for his opportunity on the big stage but it will finally come at ONE on TNT this week.

Schmid faces up and coming contender Rade Opacic and he feels his experience will give him an advantage over the young Serbian,

“I would say experience is the obvious advantage for me. I have a lot more fights,” he said.

Opacic burst onto the scene with a highlight reel KO of Errol Zimmerman but Schmid has already beaten the Dutchman and feels his win was the more impressive, 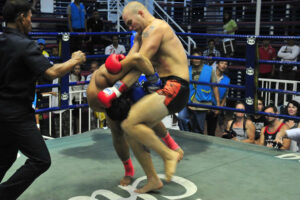 However Schmid is grateful to the Sebian for scoring a series of impressive knockouts. He thinks Opacic’s recent form is the reason this heavyweight kickboxing fight has found its way onto the biggest ONE Championship card of the year,

“Even though just debuting for ONE is already nice for me, the fact (that Opacic is) doing so well has helped me get here. We’re on one of the biggest cards ONE has ever had. I don’t think I’d be able to make my debut on a card this big if he didn’t have his two impressive knockouts. If I beat him now, it will push my name even further.”

While he will have an advantage in terms of experience Opacic is the taller of the two heavyweights. Schmid thinks this is a factor which could determine what happens on Wednesday,

“It’s pretty obvious what he’s going to want to do. He’s the longer guy and he’s probably a little bit quicker, so he’ll do the long-guy game use long jabs and, if I get in close, use the knees.” 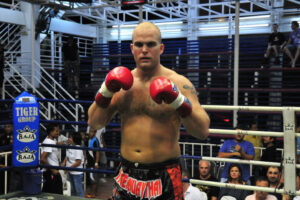 Schmid believes the onus is on him to close the range and turn it into a brawl,

“I have to close the distance and he has to try to keep me away. It’s always the same with the tall guys to little guys, I’m not little but he’s really tall,” Schmid says.

The Swiss veteran wants to get up close and personal with his opponent and thinks he will need to turn it into a real war if he wants to win,

“I’m going to try and work my way in and hit him, work the body, and use my low kicks. A brawl to see who has the hardest head is not always the best thing to do but that would work out better for my style. I’ll probably have to make it a slugfest because he is longer, so we’ll see how that goes.”

He is well aware that it takes two to tango. Schmid seems concerned that Opacic will try and avoid getting sucked into the sort of slugfest he is hoping to instigate.

Having won his first two ONE Super Series fights by second round stoppage the Serbian has already proved his mettle. Schmid just hopes that Opacic will come out all guns blazing in Singapore so they can really put on a show for the fans watching live on TNT in the US,

“It’s about being able to put out everything that you’ve practiced and putting on a good show but for a good fight it always takes two game opponents,”