When you are a professional fighter every fight is effectively an audition. Your performance could determine whether your next role is competing in the main event of a big production or plying your trade on the undercard of a small show.

Few fighters have seized their moment in the spotlight as effectively as Petchdam Gaiyanghadao. The 20-year-old has won two fights out of two for ONE Championship, scoring early stoppages on both occasions while making a lasting impact on the crowd. The man from Ubon Ratchathani managed to make an even bigger impression with his entrances than he did in the actual fights.

A fighter and a dancer

With a techno version of the popular â€˜Baby Sharkâ€™ song blasting from the state of the art sound system Petchdam has danced his way into the ring or cage in both Stadium Putra and Impact Arena. In Malaysia he wiggled his hips and waved at the crowd but in Thailand, his second fight, the Muay Thai veteran upped the ante even further.

In Bangkok Petchdam showcased the sort of raunchy dance routine more readily associated with ring girls than fighters. He received a huge cheer from the crowd and really seemed to enjoy himself, a theme that continued after the opening bell as he finished Kenny Tse with a series of head kicks. 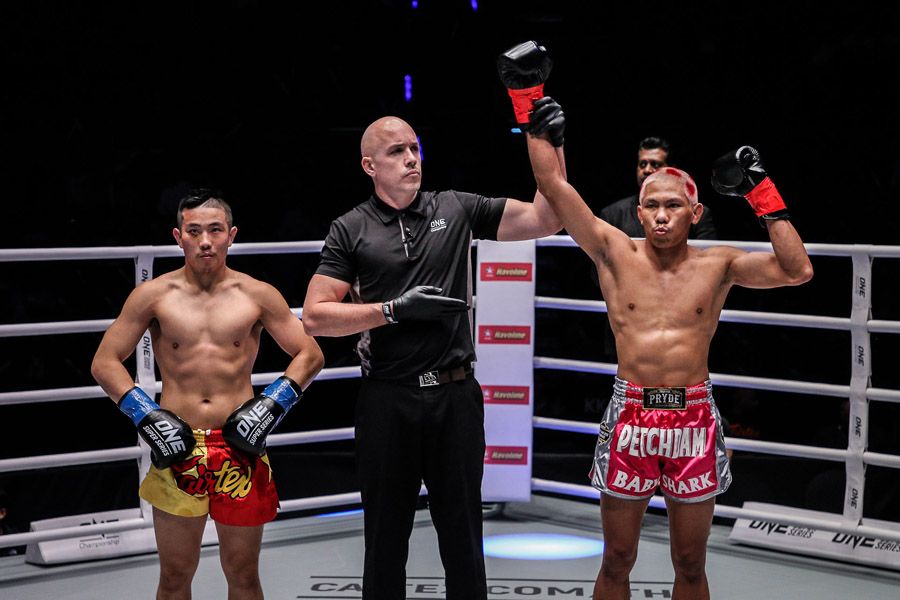 The audio-visuals and entrance music at the 11,000 capacity Impact Arena cut a real contrast to the place where it all began for Petchdam.

While there might not have been 10,000 people in the audience like there were at the Impact Arena, Petchdam still felt the butterflies before stepping into the ring for the first time.

â€œI was very nervous beforehand, but it was ok, I wasnâ€™t hurt at all. We both didnâ€™t really know what we were doing and it was a scrappy fight. I got paid 300 baht and spent all the money on toys at the same festival.â€

At that stage fighting was more of a hobby than a profession for the young Petchdam. But he obviously made an impression on the regional scene because an offer soon arrived that would take him to Bangkok and one of Thailandâ€™s most famous gyms.

â€œI carried on fighting whenever there where shows at local festivals, but not too seriously. I started to take it more seriously when I was about 13 years old and after about 60 or 70 fights my old gym owner sent me to Petchyindee,â€ he said. 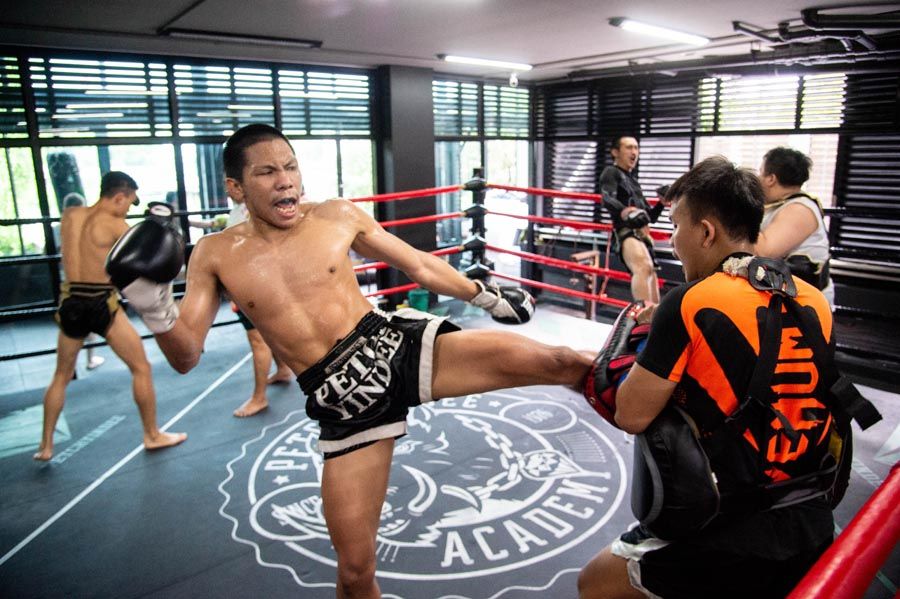 Petchdam was following in the footsteps of another fighter who came from the same village in northeast Thailand. Training at Petchyindee had helped Petchmorrakot Wor Sangrapai establish himself as a big name on the stadium scene and the young man was enticed to Bangkok partly by the prospect of training alongside a local hero.

â€œI followed Petchmorakot to Bangkok when he was already famous. Heâ€™s my idol and I also look up to my former stablemates Nong-O and Sam-A Gaiyanghadao as they have similar technical styles and I hope I can reach the same level as them in the future.â€

Nong-O and Sam-A are both clever, technical fighters just like Petchdam. The 20 year old says that he particularly likes fighting aggressive fighters who will take the fight to him,

â€œI like to fight clinch and knee fighters, but not tall ones, I like that they come forward looking to fight and donâ€™t have to go looking for them. I donâ€™t like the taller awkward knee fighters though as they are very difficult to fight and very tiring.â€

A lot of fun

This might explain why he has been such a success on the ONE Super Series, where the judging favours aggression. He admits to feeling a few nerves before making his debut with the promotion but says the experience was an enjoyable one,

â€œI was very nervous before the fight because I had never fought in front of such a large crowd before. Also I was not used to the loud music, and the special video and light show that ONE made for me but I worked on my dance with P Boat (Nuttadaj Vachirarattanawong) and in the end it was a lot of fun.â€

In the Thai stadiums, where a fighterâ€™s ability can be measured by his purse, Petchdam is one of the highest earners.

â€œI get about 130,000 Baht a fight in Thailand. I donâ€™t really care who I fight, I will fight anyone at my weight now, if the promoter thinks it is a good fight then I will fight. Iâ€™ve already fought Suakim Sitsortortaew, Chanasuk Kor Kampanart, Rungkit Mohbeskamala and Rodtank Jitmuangnon, who I have fought twice with a win each.â€ Given that there is less pressure than at Rajadamnern or Lumpinee stadiums and the purses are higher, Petchdam is understandably enthusiastic about fighting for ONE Championship in the future.

â€œI enjoyed my first experience (of fighting overseas) and would love to go to many countries to fight. It is easier to fight abroad as there is not the same pressure like fighting in the stadiums, like you get from the gamblers and crowd.â€

But while Petchdam might look like he’s loving life as he dances his way into the ring or the cage fans don’t see the tireless work he puts in behind the scenes. The 20-year-old has earned the right to enjoy himself over the course of hundreds of fights and thousands of hours of hard training.

Petchdam is on top of the Muay Thai world and enjoying the view. The path to get there has not been an easy one though and he is using his success to help build a better life for his family in Ubon Ratchatani.

â€œI have built a house for my parents and bought them a pick up truck which I pay for every month. This helps with the farming and thanks to ONE Championship I am going to be able to pay for my two younger brothers to go to school so that in the future they wonâ€™t have to work as hard as I do.â€

Fighting is an inherently serious business. Two skilled professionals will get inside the cage or ring and try to do each other damage but there can be few fighters who enjoy the experience as much as Petchdam. He’s emerged as a major star with ONE Championship and the all smiling, all dancing flyweight could be coming soon to a major city near you.