Petchpanomrung and Kevin VanNostrand fight to majority draw at Glory 72

Petchpanomrung Kiatmoo9 made his third defense of his Glory featherweight title at the Wintrust Arena in Chicago. He retains the belt but only just after a majority draw with Kevin VanNostrand at Glory 72.

Petchpanomrung was originally due to face Alexei Ulyanov, but visa issues forced the Russian to pull out 11 days before. Former foe Kevin VanNostrand was scheduled to face Anvar Boynazarov in a title eliminator but found himself bumped up to main event status and handed a shot at the champion.

Petchpanomrung faced VanNostrand previously on Glory 55, in a fight for the interim featherweight title, winning by split decision. That bout was marred by illegal sweeps and clinching and the referee and judges would play a prominent role in the rematch.

VanNostrand came out in the opening round, attacking Petchpanomrung with fast punch combinations and an eye catching jumping knee. The champion managed to slow him down a minute into the round after staggering the challenger with a hard right hook. 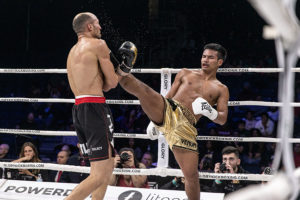 VanNostrand was soon putting the pressure back on, well aware that Petchpanomrung is the kind of fighter who will pick you apart with fast kicks and sharp punches if you give him time and space.

VanNostrand wasn’t about to make that mistake and after landing a hard right hook at the start of the second, proceeded to keep up a high work rate, with Petchpanomrung looking a little flustered at times.

Petchpanomrung managed to find his rhythm a little though towards the end of the round and landed with some sharp straight left punches and kicks.

It looked a more comfortable round for Petchpanomrung in the third, as VanNostrand took longer to get going and the Thai scored early on with some sharp push and body kicks. 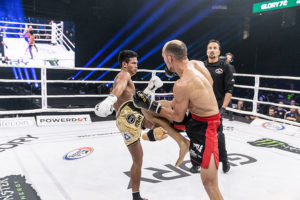 This was the slowest round for VanNostrand and he stumbled over towards the end of the stanza, giving Petchpanomrung and his team some hope that maybe his legs were starting to tire.

VanNostrand seemed to get a second wind though in the fourth and straight away put the pressure back on Petchpanomrung. The Thai fighter kept scoring with sharp left kicks, but struggled to cope with his opponent’s constant movement and pressure.

Petchpanomrung looked to try and control the ring again in the final round, using slick footwork and fast kicks and punches. VanNostrand kept pressuring though and the champion looked to clinch a little too much to try and slow him up. 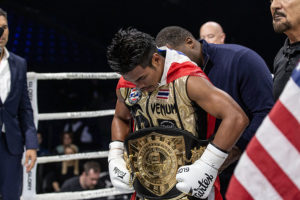 This cost Petchpanomrung in the final seconds of the round as he picked up a warning for excessive clinching and saw a tense wait at the final bell for what had now made the fight closer than he would have liked.

The verdict at the end was a majority draw with one judge scoring the fight 48-46 for Petchpanomrung, which looked a little harsh on VanNostrand, and the other two seeing it as 47-47.

Petchpanomrung didn’t get the win but remains the Glory featherweight champion after the draw. A trilogy bout seems inevitable.