The fight fans were treated to a masterclass of high level Muay Thai in the main event of the Lumpinee birthday show tonight. The returning Prajanchai PKSaenchaigym beat the in form Petchsamarn Sor Samarngarment in the headline attraction of one of the biggest shows of the tear.

By contrast Prajanchai had been away from the Thailand Muay Thai stadium scene for over a year as he concentrated on making the Thailand amateur boxing team. As tends to be the norm, the opening round was a tit for tat feeling out process as both just probed each others defences a little. In the second round the action heated up a little as Petchsamarn started to fire in some fast left kicks while Prajanchai opened up with some fast right punches and kicks.

The fight looked to be developing into a classic southpaw vs orthodox battle of wits and Prajanchai started to explode in with some fast punch and kick combinations in the third, throwing his shots in bunches.

Petchsamarn landed a couple of sharp long knees before the fight moved briefly into the clinch. There were some electrifying exchanges of kicks and Prajanchai looked to try and gain the psychological edge, beckoning his opponent forward and trying to draw him into a fight. 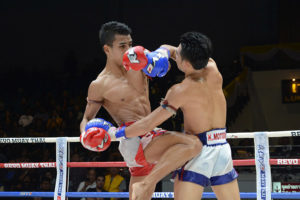 In the fourth Petchsamarn started to push forward and opening up with some sharp kicks and long knees. As the fight moved in and out of the clinch Prajanchai looked to control the ring more now, trying to keep his opponent at the end of a fast jab and showing some slick footwork.

Petchsamarn finished the round strongly though, landing with several solid kicks and some explosive long knees. It looked like anyone’s fight going into final round and Prajanchai came out strongly.

He was looking to turn the momentum back his way and landed with a barrage of right kicks. Petchsamarn was determined and pushed forward taking the fight into the clinch.

Prajanchai did a great job of smothering his attacks and lifting his legs up to block the incoming knees. A few more hard right kicks saw Petchsamarn slow up and concede defeat with around 30 seconds remaining in the round. In t he only international match of the night saw Rafi Bohic face his old nemesis Chujaroen Darpransarakham. The Thai cruises to a comfortable decision win over the French fighter.

KO of the night came in the Thailand 122lbs title match between defending champion Purnkon Diamong98 and Kompetch Sitsarawatsua. Purnkon controlled the opening round before unleashing a fast, explosive high kick off his front leg that sent Kompetch crashing out of the fight in round two.