There are some achievements that transcend combat sports. There can be few, if any fighters, from across the spectrum who have won their first 52 fights and picked up a legitimate world title in the process.

In a boxing world that tends to be dominated by the heavier, more fan friendly weight classes it can be tough for a minimumweight from Thailand to get recognition outside their own country. WBC 105lbs champion Wanheng Menayothin managed it by going 52-0, surpassing a record set by Floyd Mayweather in the process.

Like most top Thai fighters Wanheng started his career fighting Muay Thai. He took up the sport aged 13, a late start by Thai standards, but managed to quickly impress with his punching power going on to dominate the 105lb division.

He won both the Thailand and Lumpinee 105lbs titles, never losing either belt in the ring. Throughout his career Wanheng has never been stopped and has only ever once taken a count, in a 108lbs Muay Thai match against former Lumpinee champion and undefeated boxer Norasing Lukbanyai. 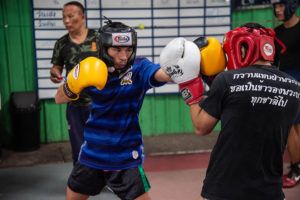 Wanheng has spent his entire career at Menayothin Gym under the watchful eye of Chaiyasit Kongkiatyong. He founded the camp over 40 years ago and has nothing but praise for the 33 year old champion,

“He has great discipline and when you explain anything to him he quickly understands. He has a very strong work ethic and, although he has a family now, when he comes to the gym he forgets everything and just focuses on his work. I have never had a problem with him outside of the ring and most importantly he has never forgotten himself and where he came from, he is the same today as when he came into the gym the first time, weighing just 30kgs.”

Wanheng is 52-0 and is widely acknowledged to have the best record in boxing history. The stage is set for anther defense of his WBC 105lbs title against tough former foe Tatsuya Fukuhara of Japan on May 31st.

Chaiyasit also spoke of the preparations for the rematch with Fukuhara,

“He is training as for any fight and we definitely won’t underestimate his opponent or take any chances. Wanheng is getting older now at nearly 34 years of age and the priority is to make sure he has the energy to go 12 rounds against a tough fighter with a high work rate like Fukuhara. We have the advantage in skills and also the hometown so [we] have to make sure we can keep the pace for 12 rounds.” 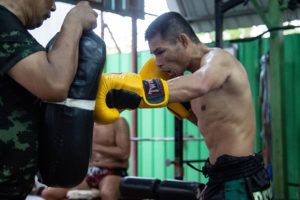 Wanheng received the award for WBC’s best boxer in 2015 and in the same year his long term boxing trainer, Army Lieutenant Colonel Suparp Boonrod, received the WBC’s award for trainer of the year.

Suparp is also one of Lumpinee Stadium’s main judges and referees and had a long fight career himself, fighting the likes of Samart Payakaroon as a young Muay Thai fighter before joining the army and representing Thailand in the World Army Games.

As an amateur boxer he won gold medals in the Asian and South East Asian Games and has been Wanheng’s trainer since the start of his professional boxing career. Suparp sounded confident ahead of his fighter’s next title defence which will take place in Chachoengsao,

“His opponent is strong but I feel we are stronger. We work hard on his timing of both throwing shots and defensively and, as he is getting older, making sure he can keep the pace for 12 rounds. I am 80% confident he will win, as you can never know for sure what can happen in a boxing fight.” 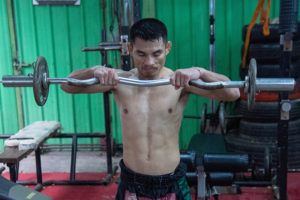 With approximately 150 Muay Thai fights in his career and over 50 international boxing fights Wanheng has been in with some of the best in the business but says the following fighters all stand out,

Wanheng also sounded confident about his upcoming fight with Fukuhara,

“Fukuhara is a strong opponent and awkward to fight, he never stops coming forward and is always throwing punches. I don’t have a set gameplan as always, I will just see what happens in the ring and we will adjust accordingly, but I am 100% confident I will get the win.”

The more wins he registers the less likely it becomes that his record will ever be matched or beaten but Wanheng cannot say for sure how long he will continue fighting for,

“I really can’t say how much longer I will fight for, it depends on my body and mind but I just want to keep fighting and keep defending my belt. I would like to maybe take on one of the other champions at my weight and unify the title, but not against Knockout CPFreshmart as we are both from the same promotions team.” 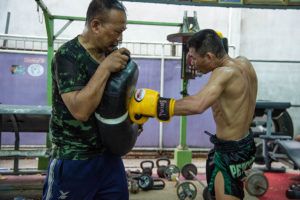 There would be limited interest in an all Thai unification fight between Wanheng and Knockout, who is also undefeated. But one possibility for the 33 year old is a move up to light flyweight,

“My main goal now in the sport would be to test myself at 108lbs and try for the title against the Japanese champion, Ken Shiro. I know the odds would be against me as he is a lot bigger but anything can happen in a fight and I think I have a good chance.”

Both Wanheng and Chaiyasit were quick to downplay any suggestion that the pressure of maintaining his historic winning streak might play on the boxer’s mind,

“Floyd Mayweather is retired now so won’t be able to overtake Wanheng’s record, but we are not really interested too much anyway. It is nice to get the recognition, but we just want to keep fighting win or lose,” Chaiyasit said

For Wanheng it is not about statistics and history books. He just likes winning fights and is determined to continue doing that both this month and beyond,

“It is not something I ever think about to be honest and there is no pressure for me to keep winning. I just want to get in the ring and fight!”