Ren Hiramoto will be making his MMA debut at Rizin 26 next week. The YouTuber and K-1 star is not just dipping his toe in the water, he is absolutely determined to succeed in his new sport.

He is no James Toney. The 22 year old sees this is a long term career move rather than a quick pay day and has been immersing himself in MMA.

For Hiramoto there is no turning back. He is set to face Kyohei Hagiwara on Thursday and says he has no plans to return to kickboxing,

“I am in love with MMA now so there is no going back to kickboxing.” 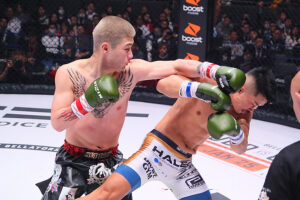 Hiramoto had a successful K-1 career but says his ambitions went well beyond the realm of kickboxing,

“I wanted to be the best and strongest man on the planet and being MMA champion is the only way to achieve that. And while I am doing this, I want to earn big money so after I retire, I don’t have work a single day in my life.”

His preparations have lasted nearly a year. Hiramoto will be making his MMA debut at the Saitama Super Arena on Thursday but he has been a full time mixed martial artist since the start of 2020,

“I went into full MMA training right after my last fight in Bellator Japan last year.” 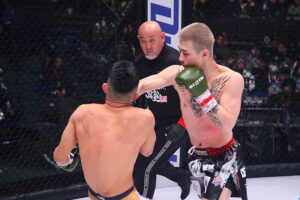 This preparations have involved training with some MMA veterans who are significantly bigger than Hiramoto,

He says that training for an MMA fight is very similar to preparing for a kickboxing bout,

“There is no difference in terms of trying to be strong as possible. Its all about an effort.” 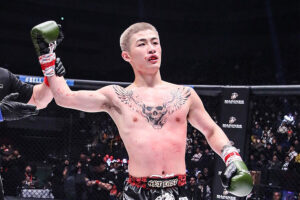 During his kickboxing career Hiramoto reached tournament finals with both Krush and K-1. Ultimately he fell short on both occasions but the 22 year old is determined to go one better and win a belt with Rizin,

“Next year, I am going to conquer the Rizin featherweight division, win the title, then go to UFC and be champion there. I have a strong belief that I will be UFC champion.”

This bout is set for 150lbs but Hiramoto plans to compete in Rizin’s featherweight division. He says nerves are not an issue ahead of his MMA debut and that absolutely no-one will be able to compete with his striking,

“I believe I am a special individual so I never get nervous. I am the best, that is all I can say.”

If Hiramoto does not succeed in his new sport it will not be for a lack of ambition, or confidence. The kickboxer is coming for Rizin’s featherweights and is looking to become the latest in a long line of fighters to make a successful transition from K-1 to MMA.