Ritu Phogat has come a long way. Both in terms of the progress she has made in her sporting career and the geographical distance she has traveled in order to find a home in Singapore and be fighting in China.

This weekend Phogat makes her MMA debut at ONE: ‘Age of Dragons’. The Indian might not be a big name in Beijing, but back home she has a huge following due to her exploits on the wrestling mat.

There was even a blockbuster Bollywood movie made about Phogat and her sisters. But at first she was just following in the footsteps of her siblings by pursuing a career in wrestling,

“For me, it was clear from the beginning that I have to pursue wrestling. To be honest, everything that people and society said or talked about was before my time. My father and sisters had to bear the brunt of that. Fortunately, I was shielded from having to go through the same.” 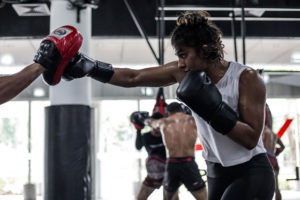 Phogat faces Korean newcomer Nam Hee Kim this Saturday. This time she won’t be beating a path already trodden by her sisters, in fact she wants to do something that no Indian has ever done before,

“I always wanted to do something different. I often wondered why there are no Indian world champions in this sport and that actually motivated me to pursue this.”

Phogat might have achieved fame and fortune through wrestling. But she was always aware of the expectations that came from being part of a famous wrestling family,

“They had given me a platform to go and perform. The fact that I was their younger sister meant that people expected a lot from me, but I always tried to forget this kind of pressure during a match and give 100%.”

On Saturday she is striking out on her own but she will have the support of a world renowned camp. Phogat is based at Evolve MMA in Singapore and has been making the transition from wrestling to her new sport under the guidance of the trainers there. 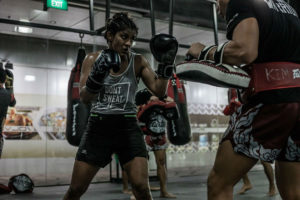 She says some people have questioned her choice of career. There are clear parallels between Phogat’s current journey and the one undertaken by her older sisters as they became pioneers for female wrestling in India.

In fact Phogat feels she has a point to prove as she prepares to make her MMA debut,

“This is my first bout in MMA coming from wrestling so I’m excited but I’m also nervous. Some people have said negative things to I have to prove them wrong.”

The Phogat name carries a lot of weight in India. Everyone has seen the blockbuster movie ‘Dangal’ and since its release the sister’s fortunes have been followed very closely,

“When my first match takes place people will be excited that one of the Phogat sisters is switching from MMA after leaving wrestling. A lot of people will want to see that,” she said. Phogat’s ambitions dovetail nicely with those of her new employer. ONE Championship is clearly eyeing up the Indian market and it appears a matter of when, not if, a show is held in a major city there.

Phogat hopes she can help win the sport some new fans in her homeland,

“I hope that MMA starts gaining more popularity in India.”

The competition in ONE Championship’s atomweight division is intense. But Phogat only turned 25 this year so she has plenty of time to catch up with the likes of Angela Lee, Mei Yamaguchi, Ayaka Miura and Itsuki Hirata.

The 2016 Commonwealth Wrestling Championship gold medalist is not short of ambition. Phogat already has her sights firmly focused on becoming a champion in a second sport,

“I would like to be the first Indian woman to become a world champion in mixed martial arts. That is my only aim.”