After losing a close decision to Saemapetch Fairtex on ONE: ‘No Surrender’ part II it looked like Rodlek PKSaenchaigym’s dreams of challenging for the bantamweight Muay Thai title were over. But he has been thrown a lifeline.

Saemapetch picked up an injury to his hand which ruled him out of the final. In his place steps Rodlek, the losing semi finalist offered a chance at redemption.

The final is set for ONE: ‘A New Breed’ in Bangkok on Friday. Although delighted to have got a second chance Rodlek feels that he shouldn’t have needed it in the first place,

“It was a very close fight, I thought I did enough to win though, I thought I had the advantage as I was pushing forward more and making the fight happen more. I spoke with Saemapetch after and he said he thought I had done a little more at the end. I always accept any decisions though and it is part of the game but I am happy I have got the chance to prove myself in the final.” It represents a quick turnaround for Rodlek who confirmed his readiness to step in and face Kulabdam SorJorPiekUThai,

“I had been training hard for the semi-final and luckily didn’t pick up any injuries in the fight, I had a few days of rest and as soon as we found out I would be replacing Saemapetch I was straight back into the gym and working hard, so I will be ready on the night.”

Kulabdam is known for his heavy punches, which saw him dispatch Sangmanee Sathiangym in the opening round of their semi-final match. Rodlek is confident though, that he has what it takes to beat Kulabdam,

“I am 100% confident that I will get the win. Kulabdam is very dangerous, but he mainly punches. I need to make sure I don’t get caught and keep my concentration. I have never been stopped by punches in my career so far and it won’t happen in this fight.” Awaiting the winner is Nong-O Gaiyanghaadao and his bantamweight Muay Thai title. He is a legend of the sport is so far unbeaten under ONE Championship, having successfully defended his belt three times.

Rodlek knows the scale of the test in front of him but if he beats Kulabdam but is confident he has a chance to dethrone the champion,

“To fight Nong-O would be much more of a test than Kulabdam. He is great technically with a high IQ and very awkward to fight. Nong-O is a fighter I have always looked up to. I still think I have a good chance to beat him though. If the Covid situation improves and the fight can be made quickly, I think whoever wins the final will have a slight advantage as we would have had two fights recently, whereas Nong-O will have been inactive.”

ONE Championship has put a series of protocols in place in order to continue putting on events during the pandemic. There is no live audience and fighters  are required to self quarantine for 24 hours while awaiting the results of their Covid-19 tests.”

It is not the usual routine but for Rodlek it will be business as usual on Friday,

“It hasn’t really been a problem for me at all. The last week before I fight I am concentrating on making weight and am not looking to eat too much or go anywhere. It is fine for me to just make weight and stay in my hotel room, it helps me focus on the fight.” 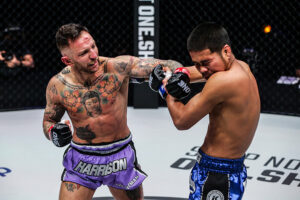