Kaew Weerasaklek made a valiant attempt to regain his K-1 super lightweight title from Rukiya Anpo at the Dolphins arena on Saturday. He came up short again in a very close fight and once again it looked like the officiating might have cost the Thai the title.

Anpo started aggressively in round one, but Kaew looked calm and struck first with a heavy left body kick. Anpo tried to catch out Kaew with a fast spinning kick, but Kaew landed with another solid left kick counter.

Anpo looked to paw away with the jab to set up his range, but it was Kaew who seemed to have the most success in the opening stanza, landing with two flurries of punches and a jumping knee just before the bell.

Anpo looked to mix his kicks up in the second round, attacking Kaew both sides with low and high kicks. Kaew still looked composed and picked off Anpo with more sharp punches and kicks.

Midway through the round Kaew started looking more dominant as he pushed back Anpo with some hard kicks and punches, but the Japanese fighter came back with a flurry of punches and an eye catching jumping knee and kick in the final stretch of the round.

Kaew came out fast in the third round, attacking Anpo with fast punches, followed by a jumping knee and a solid body kick. The Thai started to open up with hard knees, but got a talking too from the referee for holding too much.

Anpo started to put his punches together well, but the fight started to look a little scrappy as both looked to open up with knees in clinch. With 30 seconds to go in the final round Kaew got a warning for clinching when it looked as though both fighters were equally guilty.

At the end of the round the decision was announced and the fight scored a draw, so it went to an extension round.

Anpo started the fourth well, landing with some sharp punches and knees but Kaew managed to score with a heavy body kick. 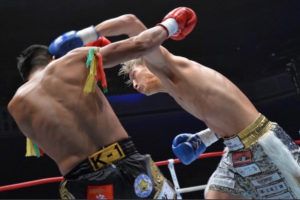 Kaew started to push forward again, opening up with knees. Meanwhile Anpo looked to score with knees of his own off the back foot.

Midway through the round the referee stopped the action again to give Kaew a second warning for clinching. The Thai seemed to lose a little heart after this and struggled to get his shots off as Anpo picked him off with some sharp punches and kicks.

At the final bell Anpo was awarded the round and the decision win. He remains the champion but Kaew can consider himself unfortunate having also come on the wrong end of some questionable officiating at K-1 World Max in June. 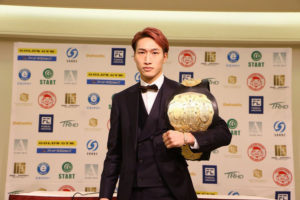 Kana Morimoto was the victor in the women’s flyweight tournament. She beat Josefine Knutsson by split decision after a fourth extension round in the final with the judges once again favoring the local fighter.

Meanwhile Thai fighter Suriyanlek Orbortor Kampee didn’t have the best debut under K-1 losing a clear points decision to Yoshiki Takei. The show also featured an entertaining back and forth exhibition bout between Takeru and Yuki Egawa