Ryuto Sawada won’t stop until he has the submission win at ONE: ‘Dreams of Gold’

Ryuto Sawada earned a spot on the Evolve MMA fight team after an open tryout earlier this year. A ONE Championship contract followed and the 23 year old will be in action this Friday in Bangkok.

Sawada faces Aziz Calim at ONE: ‘Dreams of Gold’. He’s won eight of his last 11 bouts and all three of the losses the Japanese strawweight has incurred during this period have come in title fights.

He’s challenged unsuccessfully for the Shooto 125lbs title twice and the Shooto 115lbs title once. Two of the three fighters to beat him, Yoshitaka Naito and Yosuke Saruta, would go on to win belts with ONE Championship.

It shows that Saruta is already competing at an elite level and he says he has learned from these losses,

“I’ve noticed that whenever I lost it was because I wasn’t moving well so I’ve been working on that,” he said. 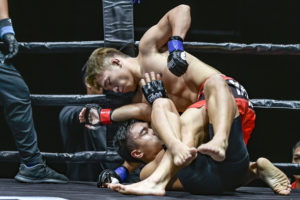 Calim made his name with ONE Pride in Indonesia. Saruta, who has two wins for ONE Warrior Series, understandably feels he has been facing a higher calibre of competition,

“I feel I’ve faced a lot of strong opponents, maybe stronger than Calim, so I think I can control the action,” he said.

Having made his name facing some of Japan’s top strawweights the 23 year old got his first taste of international competition with the ONE Warrior Series. He submitted Ismael Bandiwan and Mohd Fouzein and says he feels much more comfortable fighting outside of his homeland now,

“When I joined ONE Warrior Series, it was my first time competing abroad, so I felt very uneasy but now I don’t,” he said. Between them these men have won numerous fights and titles in the promotion’s lower divisions and Sawada feels he is benefiting from the collective experience and expertise,

“My whole lifestyle has changed. My training has changed completely since joining Evolve, it’s great,” he says.

Heath Sims is back at Evolve MMA and the veteran will have been helping Sawada put together a game plan for Friday’s fight at the Impact Arena. Sawada says a lot of time has already gone into studying his opponent,

“My coaches and teammates help me with videos to look at Calim’s movement and give me advice,” he adds.

“Calim is tall, so I have to get inside, use my striking and look for a takedown. He has shown he can finish, and there’s a height difference so I think I have to stop him getting into my space but I mostly fight guys who are taller than me and have a longer reach so that’s not really a big problem.” The majority of Sawada’s wins have come by way of either a submission or ground and pound. It’s no secret where his strengths lie and he plans to play to them at ONE: ‘Dreams of Gold’,

“I will look for a submission but if I don’t get it I am always looking for the next one. I keep going through the chain until I find one that works, and I think he won’t be able to read that.”

He is making his ONE Championship debut and the multiple time Shooto title challenger is determined to leave a lasting impression,

“Either a submission or a KO is fine but what I want most is to get the finish. What I want to show the fans most is my aggressive style. This is my real ONE Championship debut, so I want to show my good points. I’m coming for the finish from the first round.”