Several fights have been added to the Deep 104 card including a flyweight fight between Ryuya Fukuda and Makoto Shinryu. The event is set for the Korakuen Hall on October 23rd.

Fukuda is coming off a defeat to Tatsuro Taira at Shooto 0701. That was a flyweight title bout and he had previously held the interim belt but will be returning to Deep who he last fought for in 2019.

Takahashi (11-1-1) was the interim Deep flyweight champion but vacated that title in order to compete at Rizin 23. He scored a first round submission win over Seiichiro Ito at that event but has not fought in over a year.

Also added to the card today was a catchweight contest between Si Woo Park (5-3) and Seika Izawa (3-0). Both were in action at Deep-Jewels 33 with the former losing in the atomweight Grand Prix and the latter winning the strawweight title..

In the welterweight division Ryuichiro Sumimura faces Nao Yoneda in a trilogy match. The two last fought at Deep 101 with the former winning by majority decision while the latter won the first meeting.

At featherweight Naoki Hirata (3-1) has been matched with Ayumu Yamamoto. The former is coming off the first loss of his career while the latter is undefeated with both making their pro debuts late last year.

At lightweight Ryota Oki takes on Yuma Ishizuka while Kenta Kubo has been matched with Rei Tsuruya in the flyweight division. 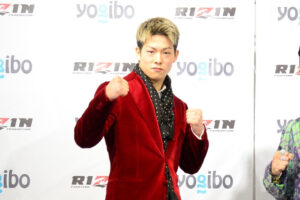