Sage Northcutt wasn’t on the ONE: ‘X’ card. But it wasn’t because the American isn’t ready to fight, his coach Urjah Faber hinted that the decision had more to do with Singapore’s Covid-19 protocols.

The UFC veteran looks in fantastic shape, as always, and shared some footage on Instagram of him shadow boxing:

Folayang was offered a fight with Eduard Folayang at ONE: ‘X’. But he turned it down with Faber subsequently explaining that members of Northcutt’s team would not be allowed to enter Singapore.

Other US based fighters like Demetrious Johnson had no issues with travelling to Singapore with their team which suggests that this might be a vaccination issue. It leaves Northcutt in limbo because ONE Championship isn’t currently using any other location for its events.

If he isn’t able to travel to Singapore than it could be a long time before we see him compete again. His last fight was in 2019 and the photogenic UFC veteran suffered numerous facial fractures.

He appears to have fully recovered but, as Faber explained, won’t travel to Singapore unless his entire team is with him. So while the 26 year old looks ready to fight he probably won’t be fighting for a while. 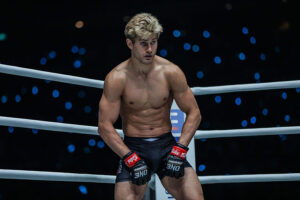